Share All sharing options for: Count the Hats, Rick Nash 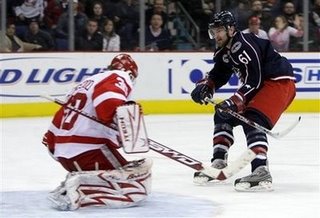 In a game of muddled legs, Rick Nash won it for the Jackets completing a hattie in OT. Any win over the Wings feels good, but if not for the captain, this would have migrated over to the VERY disappointing column. I did not feel like we played a very good game.

After the first 10 minutes, it seemed as if we lost our confidence or legs or both. The tide changed after the Hossa PP goal. We lost all of our spunk. Too many games against the Wings we stand around and watch them bring it to us. Tonight was no different. We were hung into our zone, holding our positions. We struggled to move the puck up ice and transition to offense. However, we won.

Rick Nash was amazing tonight. The breakaway was clutch, the powerplay goal was lucky, and the OT goal was opportunistic. Somedays you need your best players to win. Nasher stepped up in a big way. The big guy is streaky with points, but he's always a threat and right now he is on a tear. He was the only offensive player that seemed to stand out for us.
I should also give some props to Kris Russell, who also played fantastic. His play over the last 2 months has been stellar. When we were penned in our zone, Russ was able to carry the puck out and create some offense. He's the only blueliner on this team that could remotely do that.

Chimmer looked uncomfortable at center. He is not a puck carrier, he is a high flying wing. Putting Chimmer at center wastes his best asset IMO, his breakaway speed. This will be a shortlived experiment. We need Chimmer in first on the forecheck, NOT prying puck out behind our net and distributing. It's just not a good fit. I'd much rather have Murray in at center. He surprisingly won a few draws.

Hitch's powerplay plan is not what will work for us in my opinion. We struggled all year with two left handed units so he elects to pair Russ-Tyuts and Peca-Commie on the points. This is not a smart move in my opinion. Williams looked great on the point and Peca has never impressed me out there. He is way too conservative to play the point and he does not have a great slapshot. We need to have a mixed left and right handed point to allow better puck movement. Hopefully this is another short lived experiment. There is a reason we've been a bottom PP team all year long. I thought our PP before the break were the best we've had. Russell - Williams, Tyutin - Commie work really well for me. I'll have to agree with Claude on this one.

Mason looked much much better tonight. His lateral movement was a lot stronger. Outside of the giveaway gaffer, he played a very strong game.

Whipping Boy of the Game: I'm getting on Hitch tonight. I did not like his two lineup changes (Chimmer and the PP) and we also struggled after the first 10 minutes. Detroit were without their best 3 players and they still skated around us. I don't think we made the necessary adjustments. So I'm putting this one on the big guy. No pun / yes pun, you decide.