Share All sharing options for: A Closer Look: Jason Williams

Where he fits in the line-up: Williams started his tenure with the Jackets as the fourth line centre, paired with grinding wingers like Derek Dorsett and Jared Boll. He has worked his way up the lineup, and is now the second line centre playing with Jakub Voracek and RJ Umberger as his wingers. He initially played the point on the powerplay, but is now playing up front on the first PP unit.

Why you need to watch out for Williams: Williams is a shooter, plain and simple. He has a hard, accurate wrister and a decent slapshot. He has already scored a beauty one-timer on the PP. He is also a great passer, able to find guys through traffic. He is a boost to an anemic powerplay.

Scouting Report: Willy has decent size, but doesn't often use it. He isn't soft, he just doesn't play a physical style. His distribution skills are his best asset, hence his use on the PP point. He is a very good skater, and is an above average stick handler. 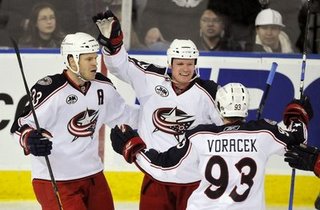 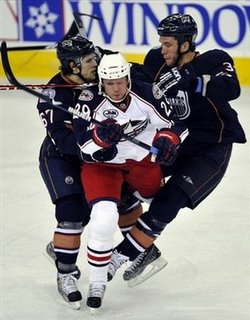