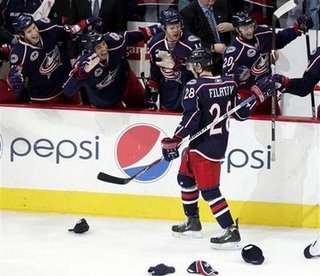 If only Nikita Filatov could score three goals every game... I have a feeling he will let us down in that regard. In his 9 minutes of ice time, he played amazing. None of his three goals were sure things, in fact they were all lucky, but it takes some skill to be lucky three times, right? Howson will be put into a strange position. Losing a year of Filatov's contract will mean, in three years we won't get him for a pile of beans. In reality, keeping that year on his contract would be marvelous financially, it would also mean that we would be able to ice a pretty solid team for another year before we have to worry about finances.

I think Howson will do anything to help this team win, but with the way our roster is depleted, we need all the offense we can get. A very tough position.

Two consecutive wins with this ragtag squad is impressive. I don't even feel like we have been lucky, we have deserved to win these games.

When we first played Washington, their color guy came to our booth during intermission. We proceeded to say that Washington's young players were much farther along in their development compared to the Blue Jackets. I bit my thumb at him. That is a load of dung, IMHO. The difference between Washington and Columbus is that Washington plays in the crappy East. Outside of Boston, Philadelphia, and Montrael, I do not think there is a team in the East that is better than us.

I have said vehementally that for the last 3 years, we would have made the playoffs in the East.

Steve Mason continues to be amazing. He is simply solid and that is what you want out of your #1 goalie.

We still need to make a deal, but that problem is now, most of the pieces we could trade are on IR, or need to come off of IR to make other players tradeable. I'm sure there is some market for Pazzy, but not if he is injured. Waiting for more teams to fall out of the picture, will only increase supply and lower prices. Waiting will not hurt us.

In the post-game Hitch said that this will likely be the lineup for Tuesday. It would be nice to get a clearer report on Rick Nash. All the winning makes that less important though, but we need 61 in there for long term success. He takes on the best defenders and creates space for other players. He was playing his best hockey before the injury.

This is sizing up to be our first real playoff chase. My feeling (pre-Brassard injury) was that we were the 5th or 6th best team in the conference. We should be a playoff team and anything less is a bust. I'm sure H&H feel the same way.

ManCrush of the Weekend: The New Tricky Nikki. How can I not give major props to Filly. Hat tricks are rare in Columbus.

Whipping Boy of the Game: While I have seen some improvement. The whipping boy is Jared Boll. Firstly I think I might be able to take him in a fight this year and secondly the thunderous body checks of last year have become less frequent. If he doesn't win fights, he doesn't check hard, he doesn't score, what does he do? He did tally his first of the year, but we need a lot more from him.