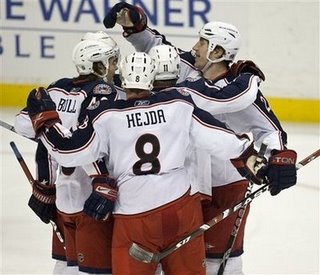 I expect a lower open for the stock market on Monday. The Blue Jackets control the market, take a peek. After a solid close on Friday, the Jackets absolutely blitzed the Avs and Footer. The special teams lost the game against the Blues.

First he Avs game. After a bad first period. The Jackets dominated the play. By the middle of the third it looked like a video game. Peca making blind passes through two defenders to the stick of RJ Umberger is the stuff EA is made of. Two beautiful passing plays from the top line were impressive, but I found the most impressive play was from Voracek. Buzzing past all the defense, shoving the dagger through the heart. That is the type of play we can expect from Voracek as he gets better. He looked like mini-Nash.

The play of Nash was impressive again. A four point night was a nice little reward from a string of solid play.

St. Louis brought their workpails. They have a fiesty mentality. They will not beat teams with skill so they need to bring hard work and effective special teams to win and they did.

Our PK looked disoriented. We took way too many in a row. A positive was Tyutin backing up a teammate with a fight. The negative was it took him off the ice for 15 minutes. Most of which were special teams and we missed him. Don't get me wrong, I'm not mad at the guy, but it certainly shows his value to the team. PKs when two of our top 4 our are in the box are frightening.

I like the first period comeback. We got down two quickly, but we did come back strong. It was still solid effort until the 4th Blues goal. Again on the PK.

We took too many penalty, (most of which were drawn off of St. Louis hardwork), and our PK was awful. Hopefully it is just a little hiccup. All things equal, I'd like to barf out all of the bad PK play in one game.

I think our awful start prompted Hitch to make more defensively responsible lines. He took Manny off the first line. I was not thrilled to see that because I thought they had reasonably decent chemistry. Plus Manny bopped Foote in the face.

For only the second time this year. Steve Mason looked ordinary. He kept them in the game. If we scored the fifth goal of the game, I bet we win.

Mancrush of the Weekend - It is actually tough to pick a guy that had a great night back to back. The only one that sticks out to me is Commodore. He scored twice and played really solid defense. He is still overpaid, but his value is improving.

Whipping Boy of the Weekend - I'll continue with Peca. He had 3 great chances to give us the lead, I think they were on the same shift. He has to score there. He has started to contribute more offensively, but we've all seen better from him. (Remember when he looked like gold on the top line to start last year?)

3 out of 4 road wins is still a great start. When it comes down to it, I'd rather give St. Louis the points than most teams in the WC. It hurts that we lost to a team we should beat, BUT maybe we'll knock off the Wings and balance it out.