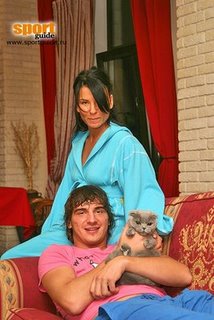 Many Jackets fans still believe that the Jackets got hosed on the Zherdev and Fritsche for Tyutin and Backman deal.
Currently:
Zherdev leads with Rangers with 9 Goals and 16 Assists and is a plus 7 in 29 Games.
Fritsche: 1 Goal 3 Assists in 15 Games.
Tyutin: 3 Goals 8 Assists in 25 Games
Backman: 1 Goal 3 Assists in 25 Games
and for argument sake
Huselius has 9 Goals and 10 Assists in 24 Games
Each point Zherdev puts up is a dagger in the hearts for some. However good decisions are made with brains, not hearts.

I will knock on one criticism early, taking Backman back in the deal. Honestly this is the one thing that is up for debate, BUT he is off the books next year. If he could have ran the powerplay, it would have been well worth it. Overall, Fritsche and Backman will never be the focus of this deal. It will be Zherdev vs. Tyutin, so lets compare this one.

First, The circumstances of the deal: Our #1 priority in the offseason was the upgrade our top 4 defensemen. Howson keyed early on Commodore and got him signed. He pressed long and hard after Redden, he refused to be outbid. Other defenders signed as Redden deliberated. We could not pursue until we had confirmation. Redden decided to sign (thankfully) his 7 million dollar contract with the Rangers. While it hurt on that day, it is best in the long term interest of the team. We did not sink more dollars into a declining vet. That contract will look bad in a couple year (it looks bad now).

So we miss on Redden. The best defender left on the board is Scott Lachance. Our top 4 defenders are Hejda, Klesla, Commodore, and Tollefson.

We had to make a move. We needed a player with top pair potential. We didn't have too many assets to deal that would be worth this item.

~Zherdev~ Which Z would show up this year? Would he be the solid player for the year before, or the trainwreck from two years. Would he be the holdout, slumper from 3 years ago? He has dazzled us many times, but not many fans would be sure what they would get from him.

Could you dare trade Zherdev?

He has charred some bridges with the some teammates (but by most accounts was getting better). Although this he still was the media whipping boy and the whipping boy of 50% of the Nat. His toe drag looked pretty, but every failed one in the Nat drew curses from every section (we saw it too many times before). Would Z benefit from a change of scenary to start with the a clean slate (YES! moreso than any player in CBJ history).

Honestly, I've worried a whole lot less about this team this year, probably because I put a lot of thought into Z's current feelings, his mood, his contract, worrying if he'd want to stay, yada yada. This is not relavent to the actual trade so I'll stop this ramble now.

How much money would he ask for in the offseason and is he the type of player you'd give it to? Is he reliable? Does he fit well into this system? Based on comparables, by not trading him this year you are committing to offering 6.5-7.5 million dollars next year. (He'd take it if wanted to continue to play in the stifling Hitchcock system). Perhaps the new KHL would be nice and warm with his good pal Radulov (although the KHL looks weak, it was still making big waves at the time). Is it worth waiting a year to deal with this, with a player you are not sure you want.

~Zherdev became tradeable. For all of his great plays, he hurt the team often. I really like Zherdev and I think for the most part he was misunderstood. He holds himself to incredibly high standards and wants to win.

The first thing Howson probably was thinking about was checking out the UFA forwards and Huselius is still on the list. His attitude was probably, if he could sign Juice, and make the trade, then it would be like he "signed" his other top 4 defender. He did this in backwards order, but once the trade was made, Juice was his ONLY priority. He wouldn't even let the guy go to bed without an answer. If he doesn't sign Juice, the trade fails. At the end of the day, you feel like you added Tyutin and lost nothing.

Is Tyutin worth it? First off, I've been pimping him ever since game 6. He was dreadful in the first 5. He has been incredibly solid since. He gets shots through, play the puck on the boards, and moves it up ice look nobody we've had since Spacek IMO.

He is also signed for THREE MORE years at an average of 2.8 million. He would have easily gotten twice as much if he was on the open market this year. When Jeff Finger is a $3.5 million dollar player. Tyutin is at least $5.0 million. Tyutin still has more untapped potential. He also looks like a #2 defender IMO. Something we did not have on the team.

If still in Columbus, would Z be playing this well? We'll never know.

Zherdev's low trade value. Other teams had the same iffy feelings we had. Why would they deal a nice young piece for a big, sexy question mark? We couldn't get Lupul two years ago and would have given him away for the late Luc Bourdon, but would have been rejected. It is amazing we got a top pair defender who is signed at 50% off for 4 years.

At the end of the day this trade improved the team, we have a better team and more defensive puck movement than any to date. I hope I have clearly stated this argument, because I am tired of restating facts. I've tried to refrain from much opinion in this. I've tried to keep it as a rational statement of facts. Support Z, cheer for him. Get a #13 Rags jersey. Enjoy the greatness without being a constant observer of the annoyances.

We have a GM that makes asset management decisions with his brain instead of his heart and that will keep us out of trouble more often than not.

Leave your comments on this analysis to continue the never ending debate :-)