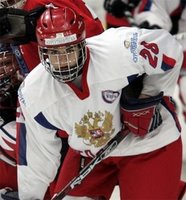 Hi folks, hope everybody is having a great holiday season so far. Speaking of the holidays- the World Junior Hockey Championship is underway. The Jackets have four prospects taking part in the tourny:

Nik is the captain of the Russian team, and is easily their most talented player. He led the Russian team in scoring at last year's tournament, and will look to do the same this season. Leading up to the World Juniors, Filatov was struggling to score for Syracuse of the AHL, so a chance to play against peers and dominate will do wonders for his confidence.
Cody Goloubef, Canada

Goloubef is part of a very strong blueline group for Canada. He has been paired mostly with either Alex Pietrangelo, (the Blues first rounder) or Canadiens prospect P.K. Subban. Goloubef is the only college player on the team. In the tournament opener against the Czech Republic, Goloubef had some decent offensive chances off of big shots from the blueline. His size is also put to good use fighting for loose pucks in the defensive corners.

Ruth, like Goloubef, is part of a deep blueline for the Americans. He is steady and reliable on the backend, not flashy but effective. He'll allow the forwards to roam a bit more. You'll probably have a hard time noticing him because of his playing style.

He's not a big part of the offense for the Czechs, but he is an important player nonetheless. He plays like a power forward, banging the body and doing good work in-tight. I noticed that his hands aren't the best, he's more comfortable playing the board game, crashing the net (although he didn't get many opportunities yesterday against the Canadians)