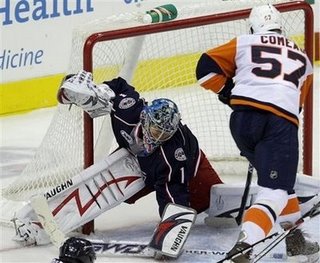 After a miserable three game road trip, with the season on the brink, the Jackets came up big with two necessary wins. The Predators looked slow, the Isles looked underskilled. An AHL All Star team would boast a serious talent upgrade over the current Islander squad. If the Jackets lost to the Preds or Isles the season and motivation could easily fall in the ultra competitive Western Conference.

Overall the chips will fall. I find it hard to believe all the teams in the West will continue this solid play. Some will inevitably fall out of our way, we just have to make sure it is not us. The talent is here to be a top 6-8 team in the conference. It would be the most frustrating disappointment to wilt away before the deadline.

Here is the deal. We outplay most teams for long stretches. Here is our problem. When we outplay teams, we do not necessarily score goals. When teams outplay us, it nearly always ends up in the back of the net. Watching the Isles powerplay gave me a goal for our roster. The Isles are also very left handed on the blueline, but two right handed players manned the left side boards, and left side of the goal crease. It simply allows for better puck movement, rotation, and rebound goals. This is the most significant difference between losing Zherdev. There are plenty of right shot forwards that make their living on the powerplay. I'd like to see how the addition of Filatov could round out a PP for us.

Rick Nash - Still too inconsistent for my tastes. It is hard for me to tell the difference between conserving energy and coasting. There is an obvious second gear to his game that all Jackets fans see, the big question is why don't we see that every shift?

Steve Mason - Making a strong play as the best goalie in team history. I'm also loosening on my "never trade Pazzy" stance. If we could get a reliable backup, I'd have to entertain the thought, because that would also save 2 more years worth of cash we can use to fix the top 2 d or get a top 6 center.

Fedor Tyutin - He makes smooth easy plays to transition the puck up nice. Most of these moves are so subtle and natural that they aren't even noticed. He rarely rims the puck. He gets his nice slapper through. He has been the rock on the blueline. I expect to see him ascend to top pair status if we are able to pick up a compliment top pair player (from Toronto :) )

Russell and Backman - They both made terrible turnovers over the past two games. Not what you want from your 3rd pair. However, I have loved Russell's game. His skating sets him apart by a wide margin and he layed out a player with a check against the Isles. If he can develop a slapper (eat some beef) he would be a GREAT second unit QB. Backman still doesn't do anything for me. If he can't QB a PP or play on a PK reliably, we are better off without him. There shouldn't be a player in the league that can't play PP or PK. I hope we see Klesla take his spot upon his return. I think the loss of Klesla adversely effected our PK. He might not be the top pair guy Jackets fans hoped for, but he is solid on the PK.

Huselius, Chimera and Umberger are the players that will ultimately make us a playoff team or not. Chimera was great last night, but all three have been quiet for a while.

The Powerplay, it is hard to know if our PP looks better or if we have just run up against some weak PKs. We seem better with puck movement, but just adding one right shot on the left side boards, would be great.

Mancrush of the Week : Steve Mason, I never would have imagined I'd consider dealing Leclaire, but Mason is a hoss. If Mason is going to be the starter in 80% of the games, the thought has to be at least entertained. I do think solid goaltending is the backbone to any kind of run, but I also know that as the deadline approaches some teams will be looking for a goaltending upgrade and Leclaire will look very attractive.

Whipping Boy of the Week : Michael Peca, I put him on the list a while ago and his play has not improved. We saw his minutes reduced. I saw his comments like he didn't understand. Pecs is smarter than this. You have to contribute something offensively in the new NHL. His faceoffs have been weak and has looked (uncharacteristically) out of position recently. If you don't score, don't win most of your faceoffs and are out of position, what are you? He's a vet, he's smart enough to turn it around. I have faith.
The true test comes tonight against the hot Blackhawks on the road. I know we can play with this team. I like their blueline. If we can score goals, we can win, but recently we have had problems with that.