A Costly, Much Needed, Victory

Share All sharing options for: A Costly, Much Needed, Victory 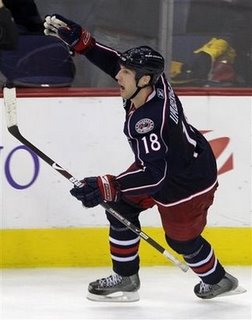 Most of the adjectives in the dictionary could be used to describe some aspect of this game. I need to get this on paper fast.

The Sharks are good. By far the best team we have played this year and probably the best team I've seen in a few years. After the Peca goal to tie, they came back so hard and fast. Their team speed and aggressiveness is frightening. We gave up 48 shots which has to be a season high. They continually put pressure and fired pucks at the net. Mason was up to the challenge.

In all but about 3 of our games, I believe we have either matched or exceeded the effort of the other team. Last night our best was overmatched by the best of the Sharks for most of the night.

Although the win was great Chimera and Murray will both be out of the lineup. Chimmer likely for an extended period of time. The news of a groin injury is not good at all for him since much of his game is built on speed. He'll need to get a full recovery to get back and trust it again. I expect Chimmer to try to come back too early.

Rick Nash played a quietly solid game. I really would like to see more aggressiveness from him night in and night out. He made a great play off the boards to gain the second assist on Peca's goal (finally).

With a win tonight against Dallas, the Jackets will move to over .500 for December. Considering the start to December, that is an accomplishment.

Mancrush of the Game: Commodore - Hejda , Since Steve Mason is a permanent mancrush fixture, I'm tossing in the Commie - Hejda pair. They were matched up against San Jose's top players all night long and hung with it. They were also a critical PK pair against the Sharks's deadly unit.

Whipping Boy of the Game: Since this has been a good luck charm lately, I'll put Derick Brassard here. He has teased us with his tantalizing playmaking. For the first 10 games he was the best player on the ice. He has disappeared. I'm sure opposing defenses are much more aware of him, but he needs to adjust his game.