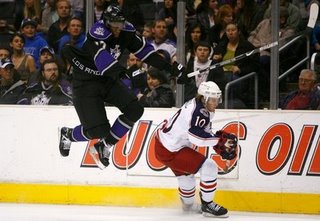 The fate of the season would be decided by a bad road trip. The good news is the guys really brought a big defensive effort to shutdown the Kings. If the Jackets are able to come out of the 6 game roadie with more wins than losses, it will be a success.

Rick Nash played a great game last night. Recently he's taken to a roll of set up man very nicely. He made a beauty pass to Manny against Philly and set up Russ for a powerplay goal. I've always preferred parked Nash in front of the net over perimeter Nash. I think this may be one of the most obvious criticisms of his recent play. I think fans want to see him drive the net. A great game none the less. He simply wanted that empty netter. He made up 3 steps on Dustin Brown to get the loose puck.

Steve Mason has been tremendous. Teams play better hockey when they trust the goaltender. He is firing on all cylinders at the moment.

I actually thought Alex Picard has looked very good in his recent callup.

I don't know if I like Tyutin as much when paired with Klesla. I'm not sure if there is a chemistry issue, but I think he looked better with Methot. Big props to Rusty for blocking a pass with his face. I do not think it damaged his soulful eyes.

We are watching the best special teams play out of the team this year. The PK has been stellar. They shutdown the Flyers top unit and kept the Kings quiet. PKs start with the net out so it shouldn't be a surprise that we are doing well.

The PP has had the best puck movement. I think pucks are going to the net more often and faster. When the points are pressured, usually what happens are they try to move the puck across the blueline. What has been happening recently are those pucks are quickly getting funnelled toward the net, (where we'll have more numbers). It create more frantic penalty killing and more chances. I think we have seen improved play out of our blueline keeping pucks in and getting pucks through.

Mancrush of the Game: Rick Nash tonight. Games like this should be much more frequent out of him, but it is games like this we also take for granted. He was great all night. The Juice-Manny-Nash line has been effective.

Whipping Boy of the Game: Mike Commodore. Weak penalties. He has the habit of taking the weak and needless penalty. Nothing like flinging it over the glass with one second on the clock. He's been solid this year, but he needs to understand that's a key Penalty Killer and he can't put the team down as often as he has been.