Who Clogged the Toilet?

Share All sharing options for: Who Clogged the Toilet? 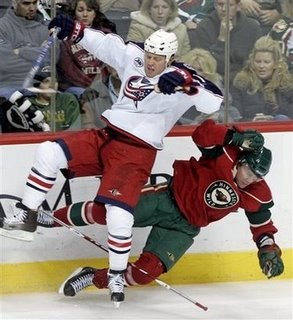 After a high flying offensive show in Buffalo, we witnessed grounded airplanes driving back and forth on the runway. I would gather that the ice in the neutral zone was about 1-2 inches lower by the end of the game.

Our early struggles against the Wild for me is particularly frustrating. On paper they only have a glimmer of offensive minded players. Their defense while mobile isn't overwhelming. Coaching and goaltending is the reason for their early season success. The Wild capitilize on their chances, whether that is on powerplays or counterattacks.

Even though this was the second on a back to back, I thought our energy was there. However we could not sustain tempo due to the invisible barrier known as the Minnesota blueline. We could not take the puck through with speed, and even had the trouble with good dump ins. The retrieval and removal from the Minnesota zone is some of the best in the NHL as it has been in the past 5 years.

One last thought on the Wild, I thought Brent Burns was on the verge of becoming a top pair defensemen? I'd play Zidlicky up front before him.... but they won the game, so I'm going to quit talking about them.

Brassard - Juice - Nash was the best line of the game, which is great news for us. This is a line that can be hard to match up with. It has been successful in two road games. Imagine how they'll do when we can decide their matchups.

Nash has quietly scored in three straight games and finally executed one on one. He finally got the puck more than 2 inches off of the ice. I think playing with both Brassard and Huselius will send him to new heights. Huselius is a noted threat, Brassard is quickly becoming one. Nash has rarely played with one other offensive player let alone two. He can finally settle into being that great third piece to a line.

Mason manned the pipes admirably, but looked suspect in the shootout. He got beat by two quick wristers.

ManCrush of the Game: Rick Nash - He's coming back to old form. It only takes a couple goals to get him rolling again. He might go scoreless in 9 and the score in 9, never worry about this guy. A little nugget from Pazzy was that he was battling a cold that he claims he got from Nash. That stuff can zap an immune system and energy fast. We've seen him reemerge.

Whipping Boy of the Game: It is too easy to pick Backman so I'm going with Torres - Peca - Modin, the line had been very consistent for us, but they looked disoriented last night. Torres was moved off of that line at the end of the game. He's a guy that really needs one. I love his energy, but he has had a habit of making cute plays to nobody. I think he'll be great long term. With these three vets there are no reasons they shouldn't be effective every night. I'm critical tonight because I thought positionally they were bad. No excuses for that with those three.

So are you happy with the 3 point road swing? Hit the comments.