A Tale of Two Cities

Share All sharing options for: A Tale of Two Cities 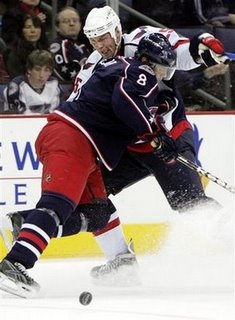 The Jackets gave away points at the Joe on Friday Night, but decided they would not give them away against the Caps. The Jackets played hard in both, but in my opinion the difference was between the pipes. Pazzy will be playing himself out of starts in the near future.

This was probably the best I've seen this team play. They finally played the physical hockey that we have been told about. We laid more hits tonight. It was nice. Hits do lead to chances, that is Hitchcock hockey, you just have to consistently hit.

This shows again the weakness of the Eastern conference. I would have liked to have seen the Caps at full strength, but much of their hype is built out of an awfully weak division. What was with the play-by-play Caps guy saying, "They are much farther along with the development than the Blue Jackets." Umm I think that is a total load. Swap divisions and I think we could say the exact same thing.

Huselius has been a chance machine lately. He's cashed in on a few, but I'm sure he is not happy with his percent. He missed another breakaway tonight, but it is refereshing to see someone other than 61 getting these type of chances.

Nash potted 2 last night and has been playing some really great hockey.

Tonight we saw the reunification of the Goat line. I like it because I think it gives us more balanced scoring. Brass was put with Nash to get him going again, well Nash is going. I honestly thought the Goat was pretty invisible tonight, but hopefully they will be recapturing some of the early season magic.

Torres finally got his goal. He needed one. I would like to see better forechecking and less cute plays out of him. The little drop passes from him get on my nerves. He scored his goal in the dirty area, that is where he wil score his goals.

Tyutin has continued his stellar play. He has been the best defender on this team since *gasp* Jaroslav Spacek. He moves the puck up ice effectively. When he finally gets to be a second PP d or on the second unit, he'll blossom for points. He is just not a QB.

I haven't been in love with Commodore's play lately. He is taking way too many weak penalties.

The powerplay looked a lot better in this game. More chances, better movement. I think Russell really helps out back there. I really have loved his play since the recall. Smart positionally and calm. I think him and Tyutin on the top PP unit gives us the best chance for success.

Mancrush of the Game: Steve Mason; The Stonemason has thrown a wrench into the goaltending plans. I doubt anyone anticipated his great play then nearly removed from his knee surgery. He was perfect tonight.

Whipping Boy of the Weekend: I'm putting the pair of Modin and Peca down here for now. These guys are vets and they need to contribute something offensively.

So a weekend split, are you satisfied?