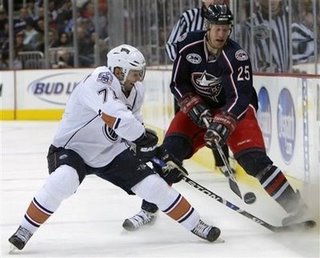 The Oil pounced on the non-televised Jackets 7-2. Good thing it wasn't televised. This was the worst game I have seen Pascal play in a long time. 19 shots, 7 goals. You will not win games. He also allowed backbreaking "Denis Goals" at the worst possible time.

Although we were down in the first 2-0. I thought we outplayed the Oil. We got a boost from a Huselius wrister, but overall we could not contain the counter attacks of the Oil. They capitalized on all of their scoring chances and we did not. We sustained offensive zone pressure, but created no offense. When we were counter attacked we were no much for the quick Oilers on the rush.

This is the frustrating games Jacket fans have grown accustomed to. A game we should win, we get down and fall. We played well, but the bounces did not fall our way and then it all broke loose in the second half of the third. We went out like a lamb. No roughing penalties, no fights.

Mancrush of the Game: The first line looked good, but not enough to get mancrush status. My true mancrush of the game is the dude that jumped by dead car battery after the game. Big Ups to you, "dude."

Whipping Boy of the Game: I usually don't like to point the finger at the goalie, but Pazzy was awful tonight. The first goal was a shot from the point. The second was legit. The third was legit. The fourth he was interferred with. We pulled the score to 4-2 (with momentum) and then he let in a weak wrister from Penner on the wing. Right through the 5-hole. It broke the team and it shows on the scoreboard.

The powerplay did not play well again and will be permenant whipping boys until straightened out.

I chalk it up to a bad night, the effort was there through the first 50, we just didn't score and couldn't stop them on the rush.

What would you try to do on the Powerplay with the current personnel?