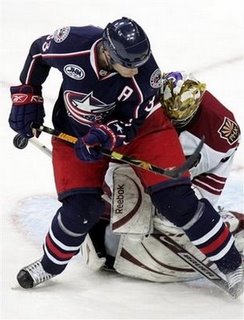 Ken Hitchcock will open his oven to a surprise. His turkey will have two left legs and two left wings.

The Coyotes unworthily beat the Blue Jackets last night in a 3-2 contest. It is not that the Jackets didn't have chances. Huselius along went 1-8 on his golden opportunities last night. We hit posts, we simply couldn't score.

Our Powerplay lost this game. Whenever you let a team hang around in the game, the momentum slowly travels over to them and the Yotes got one after killing our 5 on 3.

I was watching that 5 on 3 and I don't ever remember seeing a puck travel so slowly. Pass, hold it for two seconds, look for a shot, pass... The penalty killers barely had to move. The absense of a strong offensive right handed defensemen is killing this team. Hell even Duvie Westcott could add a couple more wins to this team. In August I predicted this would be a future problem,


"I think more than not having a depth of true RW, our problem could become not having enough Right-shot players. Currently Peca, Boll, and Novo are the 3 right shot forwards we have, so basically none of our top 6 are right handed, unless Filatov surprises. We only have Commie on the blueline. This tends to make PP one-dimensional and may cause some problem with offense on the rush."

There were a lot of positives, but you have to put teams away. You have to score goals on the powerplay, THAT is the biggest enforcer you could have. Imagine we score 3 PP on Fedoruk's dumbass penalties. He wouldn't see the ice for the rest of the game.