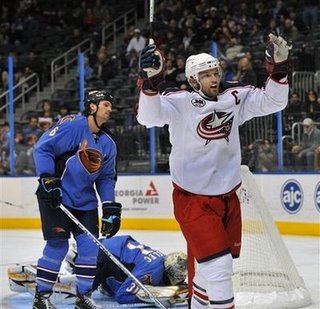 The march to the sea was not a fast or glorious process. William Tecumseh Sherman needed some weighty soliders to get his job done. Enter the Blue Jackets last night. The Thrashers were completely shut down. Now don't get excited. These were the Thrashers. There are actually 4 players on this team I would even consider for the Blue Jackets. This is probably the thinnest roster in the league. It will only get thinner when they trade Ilya. I have to feel bad for Hainsey and his 22.5 million dollars, but through the term of that contract I doubt he'll sniff the playoffs. What else is new?

Rick Nash continues to beast it, but last night used his teammates. He muscled off of the boards and then drove the net and let Ollie put the shot on net. This is the type of beautiful Rick Nash play he should worry about.

Boll versus XLB was the best fight of the year. I think Boll got the better of him though, but maybe I'm a homer, I'll have to rewatch that one six or seven times today.

Brassard continues his point streak. My main concern with him was his durability. He took a couple big shots last night and kept on going. I don't even think the Nash-Brass-Huselius line has meshed and they continue to create scoring chances. I don't remember much from Juice last night besides the tornado he skated around the offensive zone on one shift.

I thought Chimmer - Umberger - Modin looked very good. These are three big bodies and Atlanta did not have the personnel to move them. XLB was out against Nash, that leaves Hainsey as the most physical defensemen. Later in the game Voracek took Chimmer's spot and I thought looked really good. He was flying last night. His play wasn't super-effective, but he was flying. It was the Jakub we had earlier this year.

Fedor Tyutin swallowed another 25 minutes last night. He continues to impress me. He hasn't made a blunder in a while.

ManCrush of the Game : Steve Mason for his first career shutout. We have the makings of a two-headed goalie monster and I love it. Hopefully when it is in full stride we get to see the best out of both of them.

HM: To Raffi Torres, what a nasty cut he got after being hit with the puck. The refusal of stitches until post-game is an honorary ManCrush.

Whipping Boy of the Game : I'm putting Manny here today. Manny's role seems clear to me. Bottom line energy player and faceoff specialist. He had 2 or 3 beautiful opportunites to check, but he didn't take them. If we want to be a weighty team we need to have more players that Boll and Dorsett regularly check. Manny is one of them.

Again don't get too excited because Waddel's Thrashers are a pathetic looking roster IMO. He really f'ed them up when he pushed for the playoffs 2 years ago. They'd still have no offense, but at least they'd have a nice looking d.
What are your thoughts on these new road Jackets?