A Heart Attack Waiting to Happen

Share All sharing options for: A Heart Attack Waiting to Happen 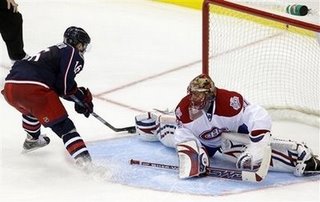 Since Columbus is one of the most obese cities in the United States, these Blue Jackets may increase the line at the John H. McConnel Heart Hospital.

The Umberger goal was huge. IF the Habs got the first one, the door might have been closed. Getting on the board first grabbed the momentum we needed to play in the game. I thought we were pretty straight up with the Canadiens for the final 50 minutes of play.

I thought Fedor Tyutin played a heck of a game. He is really starting to get comfortable on he blue line. Some will criticize him for the final tying goal, but he was going to meet A. Kostitsyn on wrap around, but he passed it short side. Pick your poison I guess. I would say he left S. Kostitsyn too early, but outside of that I thought he played real well. He gobbled up 30 minutes last night. I see Jaro Spacek 2.0
The unsung Jan Hejda played a solid game. Took a beating off his foot and ended up being a +3 with two helpers. The Hejda-Commodore pair has been underrated offensively.

I thought our first line looked the best in days, although it got switched up midway through. If Nash is going, that line is going. His motor has been higher the last few games. He went through a phase of being overly patient and waiting for the play to come to him. Now he is attacking the play. This will lead to goals... eventually.

Brassard, Mason, and Voracek, are the reasons to be pumped up this year. These guys brought it last night. Brassard move in the shootout was the sickest I've seen from a Jacket... maybe ever.
**Slash's ManCrush of the Game:**

Mike Peca - The dude is smooth and solid. He seems to always get the puck off of his man. He always makes a good clean pass. Last night he was matched up against the Koivu line most of the night. He was also dynamite on the PK... when he was on the ice. I find myself at ease when he is on the ice. the Modin - Peca - Torres line is the best third line we've ever iced and they have been our most consistent line the past two games.

**Slash's Whipping Boy of the Game:**
Special Teams - Our Powerplay was once again abysmal, with the offensive depth we now have, there is no reason we should have so much trouble setting it up. I think this exposes our lack of skill on the back end. Nobody is afraid of our points so there is a lot more pressure on our low guys. Modin has to take those two one timers from Voracek on those 5 on 3. Voracek is so deceptive with his passing, I'm not sure Modin was ready for either one of them. Hitch said in the presser there would be changes to the PP. The PK gave up two last night. Credit the Canadiens powerplay, but we need to tighten this up.

It was a great game. We got two from the best team in the east and we looked pretty good doing it.
Is this the real Blue Jackets team or are we playing above our heads? Hit up the comments page.