Finally, a Full Compliment of Forwards

Share All sharing options for: Finally, a Full Compliment of Forwards 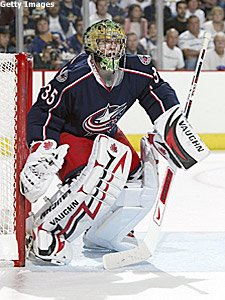 For the first time this season, the Jackets will be icing a full lineup of regular forwards. With the return of Fredrik Modin last game, and with Derick Brassard able to play tonight after missing a game with the flu, Columbus can finally send out the 12 projected starting forwards.

The top line will see Rick Nash, RJ Umberger and Kristian Huselius together. Nash hasn't scored in 6 games, but RJ has three goals in the past two games. Huselius has been a consistent point-producer so far. This could be a breakout game for Nasher.

The second line remains the Goat Line. Chimera, Brassard and Voracek will look to continue their strong play. Brassard is said to be at about 80%, so we'll see how effective he is this evening.

The third line is an excellent mix of scoring, speed, grit and size. Mike Peca will center wingers Raffi Torres and Fredrik Modin.

The fourth line will see Manny Malhotra between Andrew Murray and Jared Boll.

Alex Picard and Jiri Novotny will be the healthy scratches at forward.

While it's all-hands-on-deck for the forwards, the defense will be without Rusty Klesla tonight. He will miss his second consecutive game with a wrist injury. The Mike Commodore-Jan Hejda pairing will remain intact, and I would guess that the surprising Marc Methot will pair up with Fedor Tyutin. Ole Tollefsen and Christian Backman will form the third pairing.

The biggest surprise tonight will be in goal- where rookie Steve Mason gets his first NHL start. Fredik Norrena joins Pascal Leclaire in the pressbox with a tweaked groin. Dan LaCosta will back up Mase.


This game has the makings of a big win for the Jackets, they are coming off a disappointing loss to the New York Islanders, they have all of their forwards playing, and Mase should put on a real show. I predict that Nash will end the goal-less streak tonight. To add to the intrigue, the game will be broadcasted on national TV in Canada.