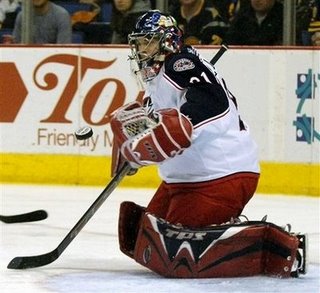 A pseudo-offensive explosion took place off of the sticks of the Jackets tonight against the Horned Slugs. Although being outshot and out power played, the Jackets put up a 6 spot against a 9-3-3 Sabres team. We are now the top 5 on 5 goal scoring team, what a difference 8 years make.

This could also be a first in CBJ history. EVERY player was a PLUS. Only Backman, Methot, Torres, and Voracek missed the score sheet.

Brassard was once again fantastic and sparkled in his top line debut. Although the line did not create much offense, Brassard did capitalize on his chance. The kid is money. When Howson said that the skill would have to come from within, I was skeptical, but now eat my crow. The Jackets have seemingly waited for years for rookies to be as advertised. We finally have hit the jackpot. He even wanted to throw down with Roy. He is a winner.

Pascal was unbelievable in his first game back. The Sabres did have a number of quality scoring chances. Our defensive play was sloppy at times, but Pazzy kept the positive attitude. A slippery goal could have swayed the momentum.

Mancrush of the Game: RJ Umberger, how he only got 13 minutes of ice time is beyond me because this was his best game as a Jacket. His goal was a great read and drive to the need. He also added a beauty assist on a Chimera deflection. It was simply a play that I am not used to seeing the Jackets make. We finally have skill depth on this team for the first time.

Whipping Boy of the Game: Christian Backman fumbled at times, and took a really stupid penalty. He clearly body checked a player about 10 feet away from the puck. I guess he was playing physical, I can't ask for much more out of him I guess.