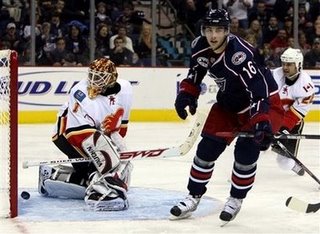 A full team effort tonight in the Nat to put out the Flames. We have a team that puts it all on the ice and can score goals. Seems like a nice concept. Chimera, Brassard, and Malhotra with the goals tonight.

I'll once again pimp Fedor Tyutin, who was all over the ice. He was visible in a good way and chewed up the most minutes. He is showing flashes of top pair potential.

Derick Brassard is going to be a very special player. He is dangerous every time he has the puck in the offensive zone and I even through the body on more than one occasion.

To me the only puzzle is Nash. He continues to look out of sync. I'm sure he is pressing. I'm sure he'll figure it out. Nash might go 0-10 but then go 10-10. The great news is that we are winning without his best game. I'm sure Hitch will be tempted to put him with Brassard in an effort to get him scoring. I know he doesn't want to put Brassard against their best checkers. I'd consider doing it at home when you have the last change.

The Stone Mason is the best backup goalie in the history of this team. We have seen the end of Freddy Norrena.

**Slash's ManCrush of the Game**

Fedor Tyutin. I was especially critical of his play through the first 5 games. He was awful. Flatout awful. He has turned it around and is playing really really strong hockey.

**Slash's Whipping Boy of the Game**

I'm sticking with the Powerplay. Awful again today. I'd park Nash in front, let him clean some garbage.


I'm not going to get too excited until we can see if we can take this show on the road...... oh I can't hide it, I'm tickled pink.