Share All sharing options for: A Closer Look: Jason Chimera

Where he fits in the line-up: When Chimera was first acquired by the Jackets (in a 2005 trade with Cale Hulse and Mike Rupp for Geoff Sanderson and Tim Jackman), he was used in a checking role, playing on a line with Manny Malhotra and Trevor Letowski. Dubbed the speed line, Chimmer scored a career high 17 goals that season. Since that season, Chimmer has been used mostly in checking situations, with sporadic time in the top six last season. This season however, Chimmer has been used almost exclusively as a top six forward, playing on the second line with rookies Derick Brassard and Jakub Voracek. Chimmer has given this line the moniker "The Goat Line", two kids and and old goat.

Why you need to watch out for Chimera: Chimera is one of the fastest skaters in the NHL. His speed is his best weapon, and it leads to many offensive chances when playing with other fast skaters. Chimmer also has a nose for the net, and possesses a good slapper.

Scouting Report: As mentioned above, Chimera is lightning-quick. This often leads to him being often offside, simply because the other skaters carrying the puck into the zone aren't as fast as he is. He has a good slap shot, but is not very creative offensively. He has average stick-handling ability, but his nose for the net allows him to score a variety of garbage goals. Most of Chimera's offense comes from shots from the wing while flying past defenders, or via the tip-in or cross-crease pass. Another one of Jason's strong attributes is his personality. He is a very good teammate, always upbeat, and very energetic. He is off to a great start to the 2008/2009 season, and is on pace to set career highs in all offensive categories. 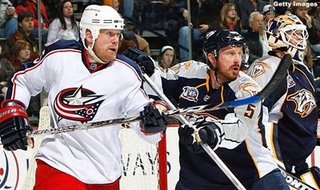