Buffalo Preview, and Some Trade Talk

Share All sharing options for: Buffalo Preview, and Some Trade Talk 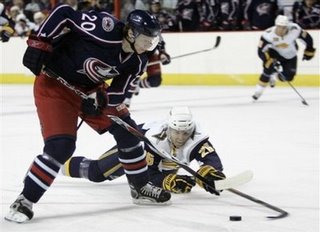 The Jackets head up to Buffalo tonight, to take on the Sabres. The Sabres have been very mercurial so far this season, some nights they come out flying against strong teams, then put up stinkers to mediocre teams. Two OT losses to the Atlanta Thrashers attests to that.

The Jackets will be facing another backup goaltender this evening, with the Sabres giving Patrick Lalime the start. Don't get me wrong, I'm not complaining that we aren't facing the other team's top keeper, but it goes a long way to show what other teams think of the Jackets.

It's unknown at this point who will be starting in net for the Jackets, likewise on defense. If Marc Methot is ready to go after missing Wednesday's game, somebody would have to sit, unless of course Hitch decides to go with 7 defensemen, and only 11 forwards. If Methot is in fact ready for action, I'd like to see him paired with Fedor Tyutin. They are clearly developing some chemistry together, along with the established pair of Mike Commodore and Jan Hejda. That leaves Klesla, Backman and Tollefsen for the third pair. I'd like to see Backman take a turn in the pressbox, regardless of his salary. A Klesla-Tollefsen pairing would be solid.

There are some big changes up front for the CBJ, with Hitch trying some interesting combinations. Currently in practice, the Jackets are skating like this:

The only line to remain intact is the Peca line. I love seeing Brassard getting a chance to play on the top line with Nash. Unfortunately the trickle-down effect puts Manny at second-line center. Voracek hasn't been as noticeable of late, so that's likely why he is starting on the fourth line. A wake-up call, if you will. You'll notice that Murray isn't in the lineup. Chances are, by the end of the game we will have seen a lineup like this:


In today's Puck-rakers blog, Aaron Portzline revealed that the Jackets and Ottawa Senators have been involved in trade talks. One rumour had the Jackets interested in acquiring Chris Phillips. While Phillips is an outstanding stay-at-home blueliner, he would be redundant on this squad. What this team needs is a true puck-mover. Another thing that the Jackets need is a number one center. Jason Spezza anybody?

There has been talk recently about the Sens needing a shakeup. Pierre McGuire of TSN stated that this is the one team that needs a real blockbuster if they are to make the playoffs. There was speculation on XM 204 this morning that Spezza is the most likely player to be traded on that squad. Alfredsson was just signed to a long-term contract, and Dany Heatley is very valuable to the Sens and by all accounts not a distraction in the dressing room. The Sens need quality blueliners, so giving up arguable their best in Phillips doesn't make much sense. Up front, the only other forward with serious value could be Antoine Vermette.

Here's hoping that the Jackets are looking to acquire a number one centre, be it Spezza or Vermette. Spezza would cost more in terms of trade value, but he is also signed for the near future at a very reasonable rate. He would instantly become the best center this team has ever had, and a true playmaker for Rick Nash. Coach Hitchcock praised him during the World Championships, saying that he is eager to learn and be coached. Right up Hitch's alley.

Vermette would be a different story. He wouldn't cost as much, and he also won't put up the points that Spezza would. If Vermette was acquired, he and Brassard would form a center-by-commitee approach., with two balanced scoring lines, the centers deciding which line they play on via chemistry with the wingers.

Here are some proposals, just for fun: 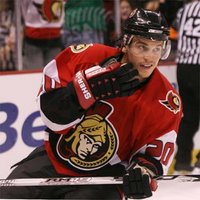 
This trade fills a hole for both squads, Ottawa gets a quality defenseman, and the Jackets get a center to join Brassard, allowing Umberger to play on the wing. The 2nd rounder balances out the value. The Sens have depth at forward, so this is do-able. 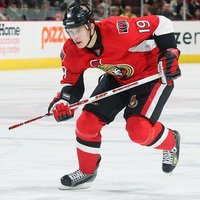 The Sens need blueliners and a goalie, and Rusty and Leclaire fit the bill. We currently have 7 NHL-calibre defensemen, and the team won three in a row with Rusty out of the lineup, proving they can win without him. Trading Leclaire would be a huge gamble. Steve Mason only has 4 NHL games under his belt, and Fredrik Norrena seems to have gotten the yips. However, seeing what Montreal did last year by trading Huet to Washington shows that if you have faith in a rookie netminder, you can trade a more experienced guy. The first round pick obviously has value, and is essentially a token piece of any trade these days.