Share All sharing options for: Our Missing Bottom Six 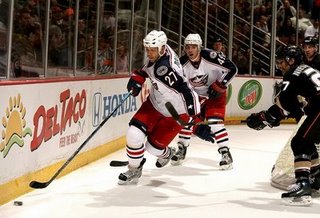 Mike Peca is facing a suspension by the NHL for coming into contact with a referee, Raffi Torres has a seperated shoulder after falling awkwardly in a preseason fight, Manny Malhotra is suffering from an undisclosed lower body injury, and today it was announced that Jared Boll will miss time with head/neck issues. My guess is that something happened with his overly-long fight with Krys Barch of the Stars.

The loss of these forwards has led to opportunities for some fringe players to get a look. Alex Picard, Derek Dorsett and now Nikita Filatov have joined the lineup. Picard, especially last night against the Sharks, has looked solid in a grinder role. He was very physical, banging bodies all over the ice. Dorsett likewise, has played with a physical edge, bringing energy to the lineup. Friday's home opener will be the debut of rookie Nikita Filatov. He will likely be used sparingly, getting some powerplay time and limited five on five ice time.

That said, the loss of 80% of the bottom six has sent ripples through the forward ranks, with a serious lineup shuffle being required. Also, not having Peca and Malhotra leaves a void of veteran leadership, which is sorely needed. Also, the PK has taken a big hit with the loss of Peca.

A tantalizing thought is to line Filatov up with fellow rookies Derick Brassard and Jake Voracek, but it's highly unlikely that this will materialize. A potential lineup for Friday:

We'll have to wait and see what comes about Friday, but this lineup makes sense. The top two lines, the best two so far this season, remain intact. Picard, Novotny and Murray have the ability to play a checking role, leaving the Filatov line to see limited icetime in a support role. Filatov has a finisher in Modin to work with, while Dorsett mucks it up to give them room to operate. If this does take place, look for Modin to also see time with Murray and Novotny five on five.