Share All sharing options for: A Closer Look: Matt Calvert

Where he fits in the line-up: Calvert was recently sent to his junior team, the Brandon Wheat Kings of the WHL. He will be one of their top forwards, likely returning to one of the best lines in junior from last season- joining Brayden Schenn and Scott Glennie. He doesn't qualify for the AHL next season, so he will likely head back to Brandon again next season, before joining the Crunch for the 2010/2011 season. He will be fully developed before making the jump to Columbus, where he may fit in on the third line

Why you need to watch out for Calvert: Calvert was very impressive at the recent rookie camp and Traverse City prospect tournament. He showed a great nose for the net and impressed the coaching and management staff. He will be a big part of the Wheat Kings, and may earn an invite to Team Canada camp. Look for him to be one of the top scorers in the WHL.

Scouting Report: Calvert is an undersized winger, who has great offensive skill and is a tenacious forechecker. He can contribute offense both individually, and can work magic with talented linemates. Long term, he projects as a third line player who can contribute 15-20 goals, and will get PK time. The knock is obviously his size, but more and more undersized players are carving a nice for themselves in the NHL.

Another one of Calvert's strenghts is his all-out effort. His motor doesn't stop running, and brings a ton of energy to every shift. He needs work in his own zone, but that is not unlike most junior players. 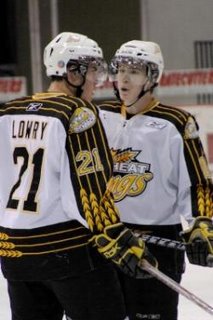