Share All sharing options for: My Favourite Hockey Books 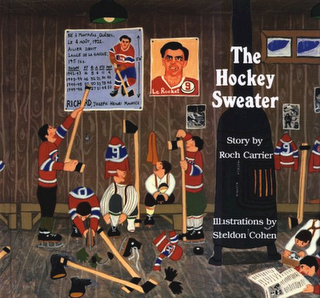 There are a ton of great hockey books out there, anything from memoirs, to fictional stories of a player's rise to the top- the list goes on. One of my favourite pieces of literature is The Hockey News. I have been a subscriber for many years now, and I look forward to getting a fresh issue every week or so. However, I wouldn't consider that a book. There are a ton of other books which people might consider to be "better", but these are the 5 that I loved:


The Hockey Sweater by Roch Carrier

This book was written in the late seventies, but my first taste of this story was in grade 3, I watched the short film "The Sweater" which was based off of Carrier's book. The premise is that a young Carrier lives in the middle of nowhere in the province of Quebec, and he, along with all of his friends, are die-hard Montreal Canadiens fans. When Carrier's Habs sweater starts to wear out, his mother orders him a new one from the Eaton's catalogue. Eaton's makes a mistake however, and accidentally sends him a Toronto Maple Leafs sweater- the hated rivals of the Habs. The story tells of the embarrassment and harrassment Carrier had to deal with from his friends and neighbours when he has to play hockey while wearing the Leafs sweater, and everybody else can proudly wear the Habs sweater.

After seeing the film, I heard that it was based off of a book. It wasn't until high school that I finally got my hands on a copy of "The Hockey Sweater" and I was delighted to see Carrier go into great detail on the larger than life rivalry between the Leafs and Habs. This is easily one of my favourite books.

The Game by Ken Dryden
I'm not normally a fan of memoirs, but a close friend of mine recommended this book to me. It's Ken Dryden's take on the 1979 Montreal Canadiens, and their march to the Stanley Cup. He reveals the way things are behind-the-scenes, away from the ice and cameras. Some of it is actually quite surprising, and some, absolutely hilarious. There were parts of the book that I found boring, but overall it's a great look into the game, both on and off the ice.

I highly recommend this book to any fan of the NHL draft, prospects or of the Blue Jackets. Leading up to the 2006 NHL draft, the Blue Jackets gave Gare Joyce unlimited access to their war room. This access, combined with Joyce's past work with junior hockey, allows him to take us way behind the scenes of the NHL draft, and into the tumultuous life of a pro scout. I'd say that this is easily my favourite hockey book, and perhaps favourite book period. The draft is my favourite time on the NHL calendar, and the fact that the Jackets are front and centre makes it that much better.

The Rebel League by Ed Willes

I've always been curious about the WHA- the only league to ever give the NHL a true run for it's money. This book chronicles the entire life of the WHA, from it's shakey beginning, to it's, well, shakey end. There are a ton of stories, including my favourite- the story of Gordie Howe and how he got the oppourtunity to play hockey again, with his sons no less. For people who are fans of the WHA, or people, like myself, who are just curious about the league, this is a must-read.

Let me start by saying Bob McCown is one of my favourite sports personalities. He hosts a radio show here in Canada, called Prime Time Sports. Bob is the kind of guy who shoots from the hip and doesn't pull any punches when he has an opinion on something. When I heard he had written a book on hockey, i knew there was no way I was not going to purchase it. I have read approximately half of it, and I love it. It's not a continuous story, it's essentially 100 mini chapters, each involving Bob giving his thoughts on a certain hockey-related matter. I can't wait to finish it!