A Look at Our Russians

Share All sharing options for: A Look at Our Russians 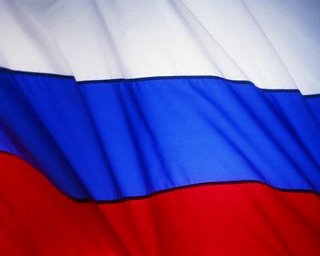 Perhaps moreso than any other team in recent times, the Jackets have been involved in high profile exhanges with the Russian hockey establishment. The first such incident was of course the cloak and dagger departure of Nikolai Zherdev from the Russian Super League (RSL) to Columbus. The next incident occured last year, when Alexander Svitov, who had just recently signed a contract extension with the Jackets- bolted back to the motherland to be with his family and play in the RSL. Most recently, the Jackets have been involved with the new Kontinental Hockey League, the successor to the RSL. This battle was centered around Nikita Filatov- the KHL wanted hefty compensation from Columbus for his departure to this side of the pond.

Zherdev of course arrived in Columbus, but was penalized by the Russians in the form of being left off of the World Junior team, and all subsequent international tournaments since then. Svitov was put on the suspended list by the Jackets, and the KHL just recently dropped Filatov's case. With Filatov arriving in Columbus two days ago, it's a good time to take a look at all of the Russian players in the Jackets organization.

Tyutin was acquired this July along with Christian Backman in exchange for Zherdev and Dan Fritsche. Tyutin is the biggest addition to the revamped blueline, and will be given the opportunity to quarterback the powerplay, and will greatly improve the transition game. Tyutin is also known for his thunderous hipchecks.

Starkov is included in this because he is of Russian birth. Early in his life his family moved to Denmark, and Starkov is now a Danish citizen and represents Denmark at international tournaments. Starkov was drafted by the Jackets in the 6th round of the 2005 entry draft. Starkov split last season between the Crunch and the Youngstown Steelhounds of the Central Hockey League. He is an offensive forward, putting up 72 points two seasons ago while playing in the stingy Western Hockey League. Starkov was influential in CBJ prospect Andrey Plekhanov's development last year, translating for him and helping him adjust to North American culture.

Plekhanov made the transistion to North American last summer. He wasn't initially signed by the Jackets at the end of training camp last season, he was instead signed by the Syracuse Crunch to an AHL contract, for the purposes of an extended look at him by the Jackets, without sacrificing a contract spot in the event things didn't work out and he returned to Russia. That was not the case however, and Plekhanov had a solid rookie season with the Crunch, putting up 25 points, including 9 goals in only 40 games. He is an offensive minded blueliner, his best asset being his absolute cannon of a shot. Plekhanov was rewarded this summer with a contract from the Jackets, and will look to get some time on Nationwide ice this season.

Filatov was the Jackets' first round pick, 6th overall this summer. He is a sublime talent, with game breaking ability. Unlike many of his Russian comrades, Filatov was extremely interested in making the immediate jump to North America. His mother is an english teacher, and he is already fluent in the language, which will make his transition that much easier. Filatov's first taste of North American hockey wil be this weekend at the Traverse City Prospects Tournament. In terms of the Jackets, Filatov is a wild card. He has the talent to make the squad out of camp, but will likely see some development time in either the AHL with the Crunch or in the Ontario Hockey League, where he was drafted first overall in the Euro Import draft by the Sudbury Wolves.

Mayorov is an interesting story. Leading up to last summer's entry draft, Mayorov was touted as a first round talent. However, with the lack of a transfer agreement between the NHL and the RSL, Mayorov slipped in the draft. He was eventually drafted by the Jackets in the fourth round, after GM Scott Howson traded three 5th round picks to the Dallas Stars for their fourth round pick. This summer, Mayorov made the move overseas, and joined the Jackets in Columbus for their rookie and prospect camp. He impressed enough to earn a contract. He will join Filatov at the Traverse City tournament, and will be evaluated at main camp as well. Like Filatov, he was drafted in the Euro Import Draft, by the Brandon Wheat Kings of the WHL. The Wheaties are looking like a top WHL club this season, and Mayorov would be a fantastic addition to their lineup. He would join '08 CBJ draftee Matt Calvert in Brandon.

Kosmachev is a Jacket prospect who has yet to make the move to North America. He was drafted by the CBJ in the third round of the 2003 entry draft. Kosmachev is a steady, reliable, defensive blueliner. He has good size and is a good skater. He has come overseas for a handful of camps, but hasn't made the commitment to stay in North American. His most recent stint was at the rookie and prospect camp, where he was a man among boys. 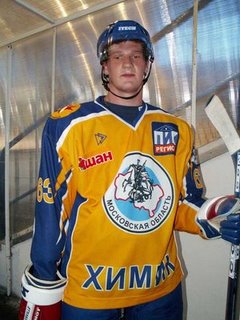 The Jackets took a flyer on Mozyakin by drafting him in the 9th round of the 2002 entry draft. Mozyakin is one of the best players in Russia over the past few seasons. He is extremely popular in Russia, and is one of their highest paid players. He is a member of the most productive forward line the past few seasons, and has performed at a very high level at every international tournament, where he is a fixture on the Russian national team. He will likely never make the move to North America, his situation is too good in his homeland.

Svitov has had a tough NHL career. He was drafted third overall by the Tampa Bay Lightning in the 2001 entry draft. He was given a ton of expectations and was never able to meet them. He bounced between the NHL and AHL for a few seasons, before being traded to the Jackets for Darryl Sydor. He seemed to carve a niche with the Jackets as a checking pivot with a willingness to drop the gloves. However, amidst problems with his family, he moved back to Omsk this past season. He has been on the Jackets' suspended list since then. A return to the NHL is unlikely.

Tkachenko was drafted by the Jackets in the fourth round of the 2002 entry draft. Ivan is an undersized winger, who has no intention of coming over to North America. The Jackets still own his rights, but they will be relinquished in a few seasons. He is a fixture in Yaroslavl.


Two other Russians have been drafted by the Jackets, but the team no longer owns their rights, and they have no intention of coming to North America. They are blueliner Alexander Guskov and forward Artem Vostrikov.