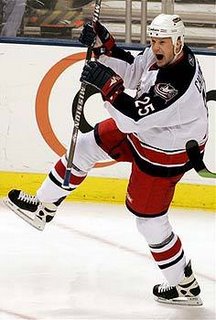 I've got a few things today:

The Jackets took on the Wild last night, losing 2-1. They iced an inexperienced lineup, but played hard and some young players impressed. Jiri Novotny scored another goal, with assists from Voracek (his second of the pre-season) and Grant Clitsome. Clitsome is quickly becoming one of my favourite prospects. He'll be a member of the Crunch this season, and will play an important role- especially with the likely departure of one of Methot or Rome via waivers.

Columbus plays their first home game of the season tomorrow night, and Hitch is throwing a very talented and experienced lineup out there:

The top six projects to be the top six on opening night, giving the top two lines a chance to gel in a game situation. By all accounts Brassard has been one of the standouts at camp, it will be exciting to see what he can do with Nash and Huselius outside of the practice rink. The third line has Manny and Murray- two guys who will likely play together on the fourth line this season, and third line fixture Chimera. Chimmer seems to be generally pissed off this camp, so let's see if that intensity continues with a more realistic lineup, at home, against the hated Preds.. Sestito is getting a look on the fourth line, look for him to drop the gloves. MacKenzie and Pineault may end up as linemates in Syracuse, so they can work on some chemistry and try to contribute.

The 6 blueliners may prove to be the unit that is sent out on opening night. Tollefsen, Methot and Rome are of course in the mix, but this group is the most talented.

Pazzy with the start, I look for him to go the distance unless it's a blowout in our favour. 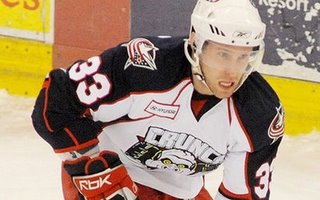 The Jackets made 12 cuts today, sending 7 players to Syracuse camp (McGuirk (pictured), Pohl, Starkov, Vigilante, Hendrikx, Smith and Landry), releasing four more, who were then invited to Crunch camp (Felde, Garlock, Hughes, Mior) and they released Shane Willis outright from his tryout. Willis is looking for an AHL deal before reporting to a camp, and it's looking like the Jackets/Crunch aren't willing to do that at this point. Best of luck Shane. 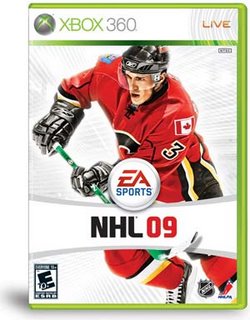 - The NHL is currently in the beta phase of launching its new website- check out www.nhl.com for yourself. I think the new site is very crisp and sharp, it's a more professional look in my opinion.

- Nikita Filatov resumed skating by himself today, and should get into some game action as early as next week.

- I finally bought NHL 09 today. I'm hooked on the Be a Pro feature, I am currently a playmaking RW on the third line in Syracuse. I'm updating my rosters manually before I start the dynasty mode.