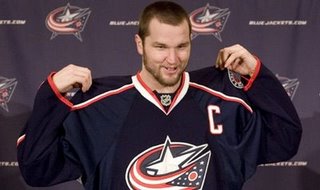 As reported by Aaron Portzline in Puck rakers, Coach Hitchcock has identified the players who are in his "leadership group". Traditionally, instead of relying on a captain and a veteran alternate or two, Hitch creates a small group of veterans that will be his go-to guys with issues regarding the team, help with bringing young players along, etc. He identified six players- Rick Nash, Fredrik Modin, Rusty Klesla, Mike Peca, Mike Commodore, and Manny Malhotra. Obviously Nash wears the C, but my guess is that one of three possible scenarios takes place:

1) Nash with the C, Modin, Peca and Klesla with the permanent A's.

2) Nash with the C, Modin and Klesla wear A's at home for example, with Peca and one of Commodore or Malhotra wearing the A's away.

3) Nash with the C, one player wears permanet A, other four alternate two each home/away.


This isn't really earth shattering stuff, but at this point of the summer it's interesting to see who the leaders are on the team.