Fringe Players who are Waiver Eligible

Share All sharing options for: Fringe Players who are Waiver Eligible 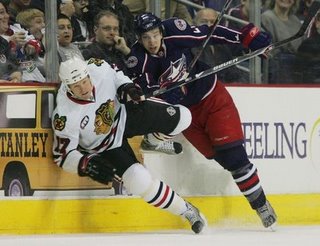 There are a few players who can be considered fringe players, and if they don't make the Jackets out of camp- they could be lost on waivers to another club.

Here are the guys who might not make it down to Syracuse, in the event they don't make the Jackets:

Steve Kelly- Fighting for a fourth line spot, will be a top player for the Crunch offensively if he makes it down.

Derek MacKenzie- Like MacDonald, is a low risk to be claimed, should be the checking centre in Syracuse.

Alex Picard- Has shown a ton of energy at main camp, if he can't cement a spot with the Jackets he's a strong bet to be claimed based on potential alone. Teams will look at the fact that he was a former first round pick and may be inclined to take a chance on him.

Mike York- Competing with guys like Jiri Novotny and Andrew Murray for a fourth line spot, could be snatched up based on his improved conditioning and past 50 point seasons.

Marc Methot - Will likely be picked up if he can't win one of the 8 spots on the Columbus blueline.

Aaron Rome- Same as Methot, these two are competing for one of the final spots with the Jackets, a good bet to get claimed.