First Wave of Cuts, and the first Exhibition Game

Share All sharing options for: First Wave of Cuts, and the first Exhibition Game 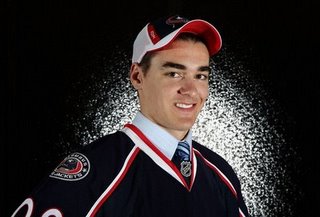 As expected, the CBJ brass made a few cuts today. Three players, all 2008 draft picks, were sent to their junior clubs today.

Brent Regner, who had a very impressive Traverse City Tournament, was sent to the Vancouver Giants of the WHL. The Giants have played one game so far this season, a 4-0 win. Regner will be an important part of the Giants' blueline.

Steve Delisle was sent to his junior team, the Gatineau Olympique. Gatineau has played 3 games thus far, going 2-1-0. Like Regner, Delisle will be a big part of his team's blueline. If Delisle can bulk up this season, he will become a top prospect.

Matt Calvert, who has been very impressive so far, both at rookie camp and at Traverse City, was sent to Brandon of the WHL. Calvert was a member of one of the top lines in all of junior hockey last season, joining top prospects for 2009 Scott Glennie and Brayden Schenn, younger brother of Leafs first rounder Luke Schenn. Brandon looks to be one of the top teams in the 'Dub, and Calvert will be a very important part of the Wheat Kings offensive attack. So far, Brandon has played two games, going 2-0-0, putting up 9 goals for.

With these three cuts, the only 2008 draft pick still at training camp is first rounder Nikita Filatov. The remainder of the players are either college players or a Euro who wasn't brought over- Tomas Kubalik.

I've updated the traning camp tracker near the bottom of the page.


As for the first game of the Jackets' exhibition season, the Jackets take on the Chicago Blackhawks tomorrow night. The players that are participating (in depth chart form) are:

Chimera, Brassard and Voracek made up the best line of training camp last season, and will be the top line tomorrow. These three will likely not play together to start the season, but they will be together tomorrow to get some game action. Murray, Novotny and York are all playing for fourth line jobs in Columbus, Mike York is looking to get his career back on track- it will be interesting to follow his progress throughout camp. Picard, MacKenzie and Boll will be a hard-checking, energy unit. These three guys all bring top effort, and Picard is looking to make a statement. Sestito and Dorsett are a great energy pairing, and will likely be playing together in Syracuse. Kelly is a jack of all trades, and will be a solid depth player for the Crunch, and could be their captain.

Tollefsen and Backman could prove to be the third pairing with the Jackets to start the season. Russell is looking to prove that false, and win a spot on the third pairing. Methot has yet to earn a full time job with the Jackets, but has looked steady in all of his callups. Ditto for Rome and Wilson. These defenders are all in the mix for two spots, so look for a very competitive blueline tomorrow night.

Freddy No will get the start, and is looking to cement his status as Pazzy's backup. Lacosta is Syracuse-bound, but will look to impress at camp. It's unsure if these guys will split time tomorrow, or if Norrena will play the whole game.