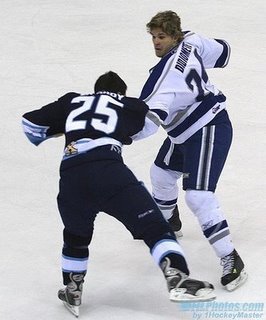 - I've been away from a computer the last few days, so I wasn't able to comment on the end of the Traverse City tournament. The Jackets' prospects finished 7th, but team record aside, there were many great things that the CBJ brass can take from this team. Jakub Voracek, arguably the most talented player on any of the eight teams, impressed so much that he was left out of the final two games because management was sufficiently impressed by him and wanted to let some of the invites strut their stuff.

- Speaking of Traverse City invites, two players stood out. Devin Didiomete and John Hughes. Didiomete contributed both goal scoring and with the fists. He reminds me a lot of Derek Dorsett, without the mouth. He would be a perfect fit for the Crunch, here's hoping he gets a contract from the Jackets. Hughes, on the other hand, showed impressive offensive ability while playing on the top line. He is undersized however, and has a lot of work to do in his own zone. Blair Yaworski also stood out, showing a good nose for the net.

- Training Camp is underway, with the first round of cuts expected as early as tomorrow. Tuesday's exhibition game should be heavy on veterans, with the team most likely looking a lot like the team that should take the ice for the season opener. With so many new faces, Hitch wants to develop chemistry as early as possible.

- Something to watch for in camp- the destinations of Nikita Filatov and Maksim Mayorov. Filatov will miss the start of camp, and Mayorov is in need of serious ice time. (He got very little the past season in Russia, being a bit part of a men's team). This means that either player could be sent to junior, where Filatov is property of the Sudbury Wolves, and Mayorov's rights are owned by the Brandon Wheat Kings. The other option could be that either player could be sent to Syracuse, where they could develop against men, and be in an easy position to be called up to the big club.

My guess? Filatov goes to Syracuse and Mayorov goes to Brandon, joining fellow prospect Matt Calvert with the Wheaties.