Share All sharing options for: A Big Win! (and a loss) 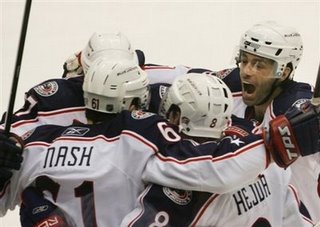 Even though the Jackets were essentially facing the Rockford IceHogs this evening, they pulled off a big win, putting 7 goals past Cristobal Huet in a 7-1 win.

This game will serve as a confidence boost to the team, along with another chance for most of the regulars to get some game action. One of the biggest highlights of the game was the offensive contribution from the blueliners- Christian Backman scored a goal and an assist, Rusty Klesla and Fedor Tyutin each had a goal and two assists, and Kris Russell pitched in with another assist, his third of the preseason. That's 9 points from the four members of the top and bottom pairings. The only blueliners not to score were the shutdown pairing of Jan Hejda and Mike Commodore.

Also scoring for the Jackets were Rick Nash with a pair, and Kristian Huselius and Raffi Torres with singles. This was Torres' debut, he was banging the body early, and played physical to go along with the goal, but he didn't play in the third period after seperating his shoulder in a fight with Ben Eager. He will be out for six weeks, according to Scott Howson.