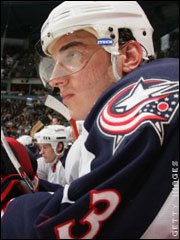 One of the most common terms that is used when describing Nikolai Zherdev- enigmatic.

Nik Zherdev will go down in history as one of the most interesting and curious characters ever to suit up for the Jackets. He is easily one of the best stickhandlers and pure offensive weapons in the league, but his attitude and approach to the game have seemingly held him back from the stardom that he was expected to achieve when Columbus drafted him fourth overall in the incredibly deep 2003 NHL Entry Draft.

In a very cloak and dagger move, similar to Evgeni Malkin, Zherdev bolted from Russia half way through the 2003/2004 season, joining the Jackets mid-season. He played well down the stretch for the Jackets, endearing himself to the fans with his phenomenal stick handling.

The following year was the NHL lockout, and Nik returned to Russia, mending fences with CSKA Moscow- the team he left to join the Jackets. When play resumed in the fall of 2005, Zherdev embarked on a bit of a breakout campaign, scoring 27-27-54 in 73 games.

Zherdev was well on his way to becoming a bonafide NHL star. In fact, the Hockey News featured he and Rick Nash on the cover of one of their issues with the title "The Rick and Nik Show". Whether he was coerced by his agent or he decided to do it himself, Nik staged a holdout leading up to the 2006/2007 season. He claimed that the offer from the Jackets was less than he deserved, whereas the Jackets didn't want to give him the dollars he wanted. Eventually the two sides agreed on a contract, but by then Nik started to lose the respect and trust of management, teammates, and fans.

What made matters worse was that Nik's worst season to date was the 2006/2007 season, the first year of his new contract. While he still had the ability to bring fans' butts out of the seats with dazzling moves, his production had completely dried up and many fans turned on him. Reports started to leak out about Nik being a poor teammate, a loner who wouldn't interact with the team whatsoever. It was also reported that he was making no effort to learn English, and that he continuously butted heads with the coaching staff and management.

Whether some or all of that is true or not, Nik was struggling. He is shy by nature, which can sometimes be misunderstood as being "stand-offish". He missed his family in Kiev dearly, and with few friends in North America, he was truly lonely. The coaches lost trust in him, and it was reflected in his playing time and his linemates. He was also snubbed yet again for the Russian National Team, which also caused heartache for him. Overall, it was a season to forget for Nik, he lost a lot of fans that year, but many stuck with him, knowing what he is capable of.

In the summer between that forgettable season and this past NHL season, GM Scott Howson met with Zherdev in Ottawa to discuss Nik's future. Howson wanted to wipe the slate clean, and offer Nik a fresh start. Nik appreciated the gesture, and responded with a solid season scoring 26-35-61, playing in all 82 games. Nik regained the trust of the coaches, and was given more ice time as a result. Early into the season Coach Hitchcock was quoted as saying "Nikky is making significant strides," Hitchcock said. "His plusses outweigh his minuses." 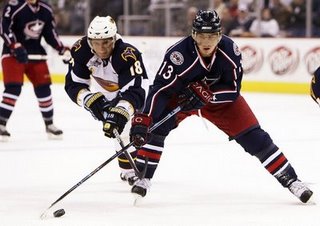 Z was also becoming a better teammate, joining in on games of poker while on the plane, participating more in team events, and being more friendly and sociable than he was in the past. Both statistically and personally, last season was the best of Zherdev's NHL career. You can just see the potential oozing out of him. However, there are three things which as long as he was a Blue Jacket in the forseeable future, would hold him back from being the 80-100 point scorer he is capable of being.

The first is a lack of help from linemates. Nik is a playmaker, who can get the puck to you in a million different ways. He needed a true trigger man on his line to take full advantage of his passing skills. He can still put the puck in the net himself, but wasn't often given the space needed.

The second is that he is in a defense-first system under Ken Hitchcock. Unlike some other "systems" in the NHL which promote run-and-gun hockey (Washington under Bruce Boudreau comes to mind) Hitch's system demands a dedication to defense, which relies on opportunistic offense, stunting some of the creativity in players like Z.

The third is that as long as Rick Nash is a Jacket, Z will never be the go-to guy. While this past season was his best in terms of points, his most dominant season was in 2005/2006, where he was "the man" while Rick Nash was out for an extended period with injury. 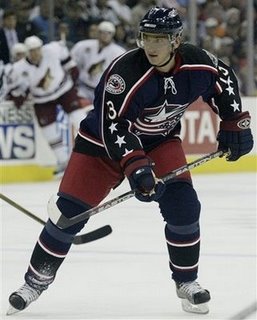 As far as Nik evolved in one season, I believe the three situations I just listed were certainly a factor in the management's decision to include him in a potential trade to plug holes in other areas. Nik will always be a reserved, somewhat oddball person. He is meant to be on a firewagon hockey style of team, or at least one that isn't as strict defensively. He needs to be one of the go-to players on his team, and he needs the trust of his coaches to let him dangle the puck all over the ice.

A team like the New York Rangers would fit the bill, and at the end of June into early July, they had an abundance of young and skilled blueliners- something the Jackets needed. On July 2, 2008, Nik was traded to the Rangers. The trade was essentially Zherdev for defenseman Fedor Tyutin. The Jackets needed to get closer to the salary floor, so they needed to take on some salary in the form of Christian Backman, another blueliner. For contract and roster position purposes, Dan Fritsche was also sent to the Rangers.

While it was no surprise that Nik was traded, I was certainly upset when I read the news on TSN. There have been many players that have come and gone from the Jackets, but I have never had a player who I was a bigger fan of get dealt or leave via free agency. I had a huge emotional investment in Z. I was a huge "Rick and Nik Show" believer, even during Z's holdout and poor follow up season. I wanted so bad for the Jackets to keep him, and give him the chance to be the dominant offensive player he can be. He is sublimely skilled, he just needs the green light to wreak havoc on the league. That said, I understand that he was never going to reach his full potential while playing for the Jackets. He has value, and we had serious holes on the blueline. I love the trade overall. Tyutin will be given the chance to be a top-pairing blueliner, and I think he will excel. He is the puck-mover that we so desperately needed, and he can throw thunderous hip-checks. Backman is no slouch either- he has the ability to rack up points from the back end.


Selfishly, I don't often follow former CBJ players after they leave the team. I really don't care. Some have gone on to win Stanley Cups, some have rejuvinated their careers after leaving Columbus. That means nothing to me. That will change with Z- I am going to follow his career very closely. I want him to prove to the Jackets, and to the rest of the league, that when given the chance he can be a true game-breaker.

I'll sure miss you Z.


As a follow-up to my post, I want everybody to watch this Zherdev highlight video. It was created by Youtube user Vega21, and it is extremely well done. I'll watch this video when I think back to Z's short, and mercurial career as a Jacket: