Share All sharing options for: A Closer Look: Fredrik Modin

Where he fits in the line-up: At this point of the off-season, many predict a Columbus top line of Rick Nash, Kristian Huselius and RJ Umberger. Freddy Modin will likely return to his natural position of left wing, playing on the second line with Derick Brassard and Raffi Torres. Modin spent the last two seasons playing mostly right wing on the top line with Rick Nash and a revolving group of centres.

Why you need to watch out for Modin: Modin missed 59 games last season due to a ridiculous myriad of injuries, including 35 games with back spasms, a combined 10 games with two groin injuries, 6 games due to a hamstring illness, one game with the flu, and he missed the last 7 games of the season with an undisclosed "head" injury. Freddy will be looking to make a healthy return to the Jackets lineup this upcoming season. He could be in line for a great year, due to the fact he won't be facing the opposition's top checking unit while playing on the second line, and he could have Derick Brassard as his centre. Brassard is a phenomenal setup man.

Scouting Report: Freddy Modin was acquired in one of the more lopsided trades in recent memory, a definite win for former GM Doug MacLean. He came to Columbus along with backup goaltender Freddy Norrena, in exchange for goalie Marc Denis- who was a complete bust in Tampa. Denis was demoted to the AHL last season, and this summer was signed by the Montreal Canadiens to play for their AHL affiliate.

Modin is a power winger, he is very strong along the wall and scores many of his goals from in-tight. He has excellent size, and uses it effectively when battling for pucks. He isn't much of a playmaker, he is more of a pure finisher. Modin has topped the 30 goal mark twice, and has a 29 goal season to his credit as well. His top weapon is his booming slap shot, a tool that won the Hardest Shot competition at the 2001 NHL All Star Game, his only all star appearance. Before last season, Freddy was always known for his durability, rarely playing fewer than 70+ games per season. He's also an experienced voice in the dressing room, wearing an "A" for the last two seasons. He also brings playoff experience to the club, winning the Stanley Cup in 2004 with the Lightning.

Modin has a fantastic international resume. He is a member of the exclusive Triple Gold Club, which includes players who have won the Stanley Cup, Olympic Gold, and World Championship Gold. Modin's first taste of international hockey was with Team Sweden at the 1994 World Juniors, he followed that up with apperances at the '96, '98, 2000, and 2001 World Championships. He won gold with the 1998 squad. In the first and thus far only World Cup of Hockey in 2004, Modin again suited up for the Tre Kroner and ended up leading the entire tournament in scoring. His most recent stint with Team Sweden was at the 2006 Torino Olympics, where he won a gold medal, giving him membership into the Triple Gold Club. 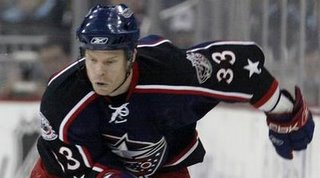