Share All sharing options for: A Look at our 2008 Draft Class + Our New Forward 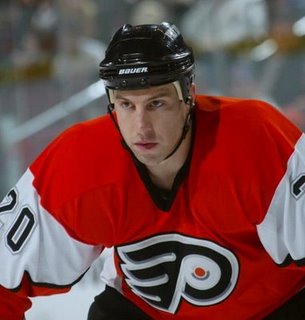 The 2008 NHL Entry Draft came and went last weekend, and the Jackets were one of the teams that was looking to make a splash.

The team added nine players in the draft, and traded for a proven NHL forward. Let's look at the trade first:

Overall, I like the trade. Getting an experienced, gritty, and versatile NHL forward like Umberger wasn't going to be free, and essentially he was acquired for Adam Foote, a player who was no longer in the Jackets long-term plans. Excellent value in my opinion. Umberger's versatility is due to the fact he can play centre or wing, and traning camp will go a long way in deciding which position he plays with the Jackets. His size and style of play would fit in well on a line with Nash and Modin as his wingers, but he could also be effective as a "space-maker" on a line with Zherdev. It will certainly be interesting to see what sort of niche RJ carves for himself on this team. One thing is for certain- he will get a lot more ice-time and special teams opportunities with the Jackets than he would have recieved with Philly.


As for the nine incoming recruits that the Jackets drafted last weekend, here is a quick rundown: 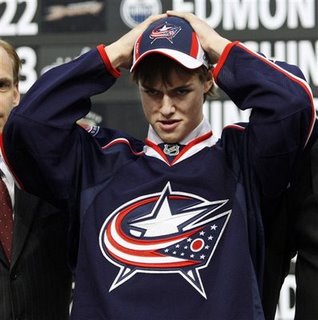 Filatov is a truly dynamic talent. He can beat the opposition in many different ways, due to his very high level of skill and creativity. He can dominate games and is equally adept at passing and shooting. He adds to an already awesome group of young forwards in the Jackets' system. I was incredibly impressed by him at the recent World Junior tournament. He was always noticeable on the ice. 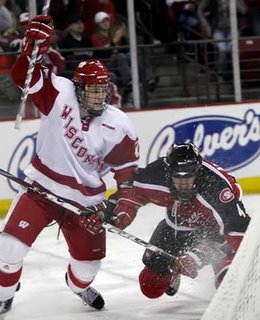 Goloubef was the youngest player in the WCHA last season, and was an important member of the Wisconsin Badger blueline. He's a two-way defender with a great shot and can play sound positional defense. With Kris Russell and potentially Marc Methot patrolling the Jackets blueline next season, Goloubef takes over as the top defense prospect.

Delisle was a rookie in the QMJHL last season, suiting up for the Gatineau Olympique. Delisle is simply put, huge. He checks in at 6'6" and 210lbs. Like Goloubef, Delisle is a complete defenseman. He can put up decent point totals, but is also very solid in the defensive zone. I have seen him play a handful of times and while he can sometimes get beat because of a lack of foot speed, he is generally a solid blueliner with a bright future.

Olson played high school hockey in Minnesota last season and was a finalist for the state's Mr. Hockey award for top high school player. He is short and stocky, and is a prototypical offensive defender, putting up a ton of points from the back end. He's headed to the University of Minnesota-Duluth next season. One major benefit of taking a college player such as Olson, is that he can develop over a four-year period while in school as opposed to the two-year limit CHL and other junior league players are subjected to.

Calvert played on one of the most exciting and dynamic lines this past season- an all-rookie line for the Brandon Wheat Kings of the WHL. One of his linemates is potential NLH top-5 pick in 2009 Brayden Schenn. Calvert is undersized, coming in at about 5'9", but has great offensive ability.

I don't know a lot about Kubalik, but he was drafted from the Plzen program in the Czech Republic. He was the 21st ranked Euro skater by Central Scouting. He has good size and that could translate to a career in the NHL. His development will be interesting to track over the next few seasons. This pick was the one acquired for Anson Carter last year, so Kubalik's success in the future will truly determine the value of that trade.

Regner was passed over in last year's NHL draft, but this past season with the Vancouver Giants Regner came into his own and had a very solid campaign. He projects to be a depth defenseman, and will be a go-to guy on the Giants' blueline next season. I like this pick a lot.

Like Calvert, Atkinson is another undersized forward with a lot of offensive upside. He'll be heading to Boston College next season, and will have the four year development plan for college prospects.

Collins was unranked by Central Scouting, but he is a power forward with good size and the ability to rack up points. He'll be heading to Cornell University next season.


Some of the interesting things to take out of this draft class are the high number of college or college-bound players, and the selections of some very under-sized players. Of the nine draftees, four will be playing in a college program, three will be playing in the CHL, and two were drafted from the European ranks. Drew Olson and Brent Regner are 5'11" defenders, which is undersized for the position, and Calvert and Atkinson are both only 5'9" tall. Again, under-sized for their position. With the way the game is played these days, size isn't an issue as much, but it is a good indicator of the Jackets' brass willingness to draft smaller players.

To go along with the four college bound players from this draft, there are four more 2008 college freshmen already in the system. 2007 picks Jake Hansen, Will Weber, and Trent Vogelhuber will all be graduating from the USHL to the college ranks, and goalie Allen York will be moving from the Alberta Jr. A circuit to college at RPI. They join Nick Sucharski, Matt Greer and Teddy Ruth as Jacket prospects playing in the NCAA. This will be a record for CBJ draftees playing college hockey in the same season.

Overall, this draft didn't have the trade for the first line center some expected, nor the selection of a top defenseman others expected, but the Jackets had a great draft, adding quality players and adding a proven NHLer who can step right in to the lineup and contribute.