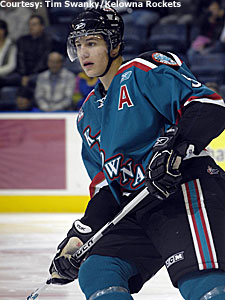 I have my own personal in-house, draft, UFA and trade targets.

Pascal Leclaire: Pascal and the CBJ brass both agreed to hold off contract negotiations until the conclusion of the World Hockey championship, in which Pazzy was a member of Team Canada. The Jackets don't want to be in a position where Pascal will be signed to an offer sheet, so he should be locked up within the next few weeks.
Marc Methot: Methot is our top defense prospect, and will undoubtedly be re-signed. He would look good on the bottom pairing with Kris Russell next season.

Joakim Lindstrom: He has yet to solidify a spot on the Jackets, but I think the team will give him a one year contract to prove his worth to the squad. He is an all star at the AHL level, but if he can't cement a spot with Columbus, he'll likely head back to Europe. He could also be trade bait.

Aaron Rome: He performed very well for the Jackets during a late-season callup, and the team likes him so much he wasn't sent to Syracuse for their playoff run in fear of another NHL club claiming him.

Clay Wilson: Also impressed during his stint in Columbus, I think he is definitely in the team's plans going forward.

Alex Picard: Similar to Lindstrom, the clock is ticking. I think based on his draft status, and the fact that he is returning from an injury (his production last season is lower than it would had he been healthy all of last season) is enough to earn him one more chance with Columbus.

Dan Fritsche: It was reported that Fritsche was a part of the trade package offered to Tampa Bay for Brad Richards, and it wouldn't be a surprise if he's included in a package this summer. He'll be qualified, but not likely signed by the Jackets.

Tomas Popperle: Pops suffered a season-ending knee injury last season, and was out for most of the year. He recently signed a contract with a European club, so he won't be back.

The Jackets own the 6th and 19th overall picks in the first round of the draft. Based on the need to acquire NHL talent this summer, there is a good chance that one or even both of the picks could be moved in trades. However, for these purposes I will assume the Jackets keep all of their picks.

1st Round, 6th Overall: It's no secret that Steve Stamkos will be the first overall pick, by Tampa. The LA Kings pick second, and it seems as thought Drew Doughty will be their choice. The next three picks are Atlanta, St. Louis, and the NY Islanders, respectively. Atlanta is in need of high-end blueliners, and I think Zach Bogosian is their man. St. Louis could be the wild card, and draft Russian sniper Nikita Filatov. Or, they could go for another high-end blueliner- Alex Peitrangelo. I think they will go for Pietrangelo. The Islanders need a little bit of everything, but I doubt they pass up the chance to draft Filatov.

With the 6th pick, I can see us taking one of the Kelowna Rocket blueliners, either Luke Schenn or Tyler Myers.

1st Round, 19th Overall: There is a good chance this pick will be moved, but until that situation takes place, my target is Joe Colborne. He's a Jr.A forward, with excellent size, and great offensive skills. He's going to the University of Denver next season, so he will be able to develop for a full four years if necessary.

2nd Round: John Carlson- Based on the depth of defensemen in the first round of the draft, I can see Carlson slipping to the early part of the second round. Hopefully he will be there when we pick. He is an offensive defender who played with Indiana of the USHL last year.

3rd Round: Philip McRae- He was a rookie with the London Knights of the OHL last season, and put up decent numbers. He has good size at 6'2", 192, and has NHL bloodlines. He plays centre but I think long-term he will be a winger. His dad Basil McRae was in the NHL during the 80s. He's currently ranked 56th overall by Central Scouting.

4th Round: Kevin Poulin- A very good butterfly goaltender who plays for Victoriaville of the QMJHL, he has the ability to steal games. He would add depth to a relatively thin goaltender pool for us.

5th Round 1: Philippe Cornet: The first of two 5th rounders, he had a bit of a disappointing season with Rimouski of the QMJHL, but I think he has the potential to be a decent player down the road. He's an offensive left winger.

5th Round 2 : With the second fifth round pick I'd like to see the Jackets take Mark Barberio, the third straight player from the Q. He's a two-way defenseman who had a solid year with the Moncton Wildcats. I always enjoyed watching him play and I think he can add a lot of depth to the defense corps.

6th Round: TJ Brodie- A defenseman with the Saginaw Spirit of the OHL, he plays a two-way game and will be looked to to become a top blueliner for the Spirit next season.

7th Round: Tomas Knotek- A bit of a risk pick, he is good friends with Jakub Voracek, is from the same home town, and also played centre on Voracek's line for large stretches this past season. They have chemistry and Knotek is a solid offensive centre.

Scott Howson has said publicly that he would like to add two centres, two defensemen and a top six winger this offseason. A very tall order, but when you think that Derick Brassard could represent one of the centres, it seems less daunting. Also, these players may not all be added through free agency. Strictly speaking of free agents:

In terms of the top six winger, my target is Ryan Malone. He plays a rugged style and has great hands and a nose for the net. He is coming off of a great season, and could be a cap casualty in Pittsburgh.

I think the Jackets have the financial ability to throw a bunch of cash at a top defenseman as well. I think we have a good chance of being in the Brian Campbell sweepstakes, but my choice is Wade Redden. He has taken a step back in Ottawa these last few seasons, but I think he just needs a change of scenery. Another free agent blueliner I would like to target is Brooks Orpik. Like Malone, he might be a salary cap casualty. He brings an element of toughness to the blueline.

I think there will only be one big trade made by Howson, and that is to acquire the top centre we need so badly. At this point I don't have a definite target, but I think we have a good chance at acquiring Patrick Marleau. My trade offer, agree or disagree, is the trade offer that the Jackets made to Tampa- Gilbert Brule, Dan Fritsche and Ole- Kristian Tollefsen, but I am throwing in the 19th overall pick (the first rounder we recieved from the Avs for Foote).