It's all about the Crunch!

Share All sharing options for: It's all about the Crunch! 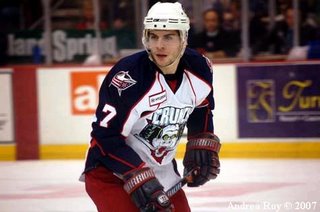 What a tear the Syracuse Crunch have been on lately!

The Crunch finished the season incredibly strong, with 15 straight wins, the last loss being a 2-1 shootout loss to the Wilkes/Barre-Scranton Penguins on March 8. The Crunch also scored at least one point in the last 23 games of the season, the last regulation loss being on February 18, a 5-0 loss to the Lake Erie Monsters.

The final game of the season for the Crunch was tonight, a 7-1 win over the Hamilton Bulldogs. It was an excellent finish to an excellent regular season for the team. They now sit second in their division behind the Toronto Marlies and have clinched home ice advantage for their first round series against the Manitoba Moose. That series begins in Syracuse on Friday.

The biggest story regarding the Crunch and their recent success has been the guys skating for the Crunch during their winning streak. The Crunch lineup was virtually depleted by callups to Columbus, but yet the Crunch continued to win. They won with character, and offensive contributions from recent college grads playing on Amateur tryout contracts, career AHLers, and a handful of young, inexperienced Jacket prospects. That bodes well for the playoffs, because with the conclusion of the Jackets' season, many reinforcements have been sent down to help the Crunch in their quest for the Calder Cup.

The current Crunch roster is very solid, one of the deepest in the AHL. The team is led by Zenon Konopka, an amazing leader and character player. He has shown so much heart during the course of the season, battling through injuries and rallying the troops during some hard times at the beginning of the season. He also finished second in team scoring. Leading the team in scoring was Jacket prospect Joakim Lindstrom, who at one point was leading the AHL in scoring, before earning a call up to the Jackets.

Derick Brassard, who was also with the Jackets for some time, finished third in team scoring. He is one of the Jackets' top prospects and has been playing like a man possessed down the stretch. Rounding out the top five in Crunch scoring were Derek MacKenzie (who also missed quite a few games due to call-up) and Adam Pineault.

I'll break down the Crunch depth chart into hypothetical lines:

These three players are all offensive contributors, and Pineault adds an element of grit and is a great penalty killer. Lindstrom and Brassard are very dangerous offensive forwards.

These guys are tough to play against. Dorsett is an agitating type, who can drive opponents crazy. Sestito is huge, and is willing to fight. He also battles for the tough goals in front of the net. MacKenzie is a top checking centre, with offensive ability.

This pairing represents the veteran experience brought in by management mid-season. DiCasmirro was acquired for grinder Steve Goertzen, and Rycroft was acquired for Phillippe Dupuis and Darcy Campbell. Rycroft was Lake Erie's captain before the trade, and DiCasmirro is an AHL veteran. The leadership and experience these players bring to the Crunch lineup will be invaluable come playoff time.

The AHL requires each team to create a "Clear Day" roster, which is essentially a playoff roster. Only players on the Clear Day roster can play in the playoffs, unless there is an injury, in which case the reserve players are eligible. In addition to the eleven forwards I listed above, there are two other forwards which were on the Clear Day roster: Trevor Frischmon and Jon Mirasty. Both of these players are on AHL contracts, Frischmon a checking centre, and Mirasty an enforcer. Both of these players will see time in the playoffs. The Crunch also have five forwards who are on the reserve roster, and they will get playing time only if injuries occur. They are:

Kirill Starkov: A Jacket prospect who is in his pro rookie year. He spent most of the season with Youngstown of the CHL. He has offensive talent but is still adapting to the pro game.

Brian McGuirk: A CBJ draftee who recently finished his college career, he was signed to an ATO at the conclusion of his season with Boston University. Mostly a grinder.

Kevin Jarman: A former Jacket prospect who is in his rookie pro season, he also spent most of the year with Youngstown. Has scoring ability.

Matt Fornataro and Mike Radja: A pair of forwards from the University of New Hampshire, they were signed to ATOs at the conclusion of their college careers.


There are six defensemen on the Crunch Clear Day roster:

Marc Methot: Currently the Jackets top blueline prospect, a defensive defenseman who has a history of scoring clutch goals.

Clay Wilson: Was the highest scoring Crunch blueliner this year, and also an AHL all star. A threat from the point.

Duvie Westcott:Arguably the best Crunch defenseman down the stretch, he brings a two-way game and NHL experience.

Dan Smith: An AHL veteran, who is defense-first and brings leadership.

David Cullen: Not very impressive, but does bring experience.

There are three defensemen on the Crunch reserve roster:

Andrei Plekhanov: Played amazing down the stretch for the Crunch, scoring a ton of points. Has a howitzer of a shot. It's too bad he wasn't playing his best hockey when the Clear Day roster was announced, he would be a lock over either Motherwell or Cullen.

Nick Holden: An offensive blueliner who the Jackets signed after his WHL career came to an end, he finished third in the WHL in defenseman scoring.

Grant Clitsome: Signed to an ATO, and then to an NHL contract with the Jackets after his college career finished.


The two goaltenders on the Crunch Clear Day roster were Dan Lacosta and Adam Munro. These two goaltenders weren't the best for Syracuse down the stretch however, that would be the goalie on the Crunch reserve roster- Karl Goehring. Lacosta spent part of the season with Elmira of the ECHL, and at the end of the year some time with Columbus, when Leclaire was down with injury. Munro has been plagued by injury for much of the season. Tomas Popperle was the Crunch starter at the beginning of the year but is out for the season with a career-threatening knee injury.

The Crunch are a very deep team and should go deep into the playoffs. The coaching staff have adopted a style very similar to Hitchcock's system, so they are a tight defensive club. They also have a bunch of players who can rack up points, and thanks to some savvy trades mid-season, now have an excellent balance of youth and experience. The Crunch were also the most-penalized team in the AHL this year, so they aren't afraid of the rough stuff, a staple in playoff hockey.

Thanks to PubOFH of HFBoards- he recommended I post the link to the Syracuse radio station that broadcasts the Crunch games, here it is: