Share All sharing options for: Hitch to Coach Team Canada 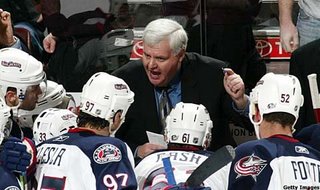 Coach Hitchcock was named the head coach for Team Canada for the upcoming World Hockey Championships this morning. The tournament will be hosted in a joint bid by Halifax and Quebec City.

Hitch has experience in international hockey from being an assistant coach with Team Canada at the Olympics. Some of the main reasons why Hitch was named as coach likely are the fact that he does have this experience, and also Rick Nash is likely going to be the leader of this version of Team Canada. Nash always raises his game when he has the maple leaf on his jersey (the red and black one, that is) and the familiarity between Nash and Hitch will make things run a lot smoother in the dressing room and on the ice. Nasher might not where the C, but he will be leaned on by Hitch to provide leadership, and of course, scoring.

It will be interesting to see how this year's team takes shape. The World Championship rosters are made up of mostly players who's teams failed to make the NHL playoffs, a handful of players who join the team after an early first round playoff exit, or in the case of Cory Murphy last year, players honing their craft in European club leagues.

Last year's Team Canada had Cam Ward and Dwayne Roloson in net. The Canes are a lock for the playoffs so Ward is out, Roloson should be available but i find it hard to think that Team Canada GM Steve Yzerman will rely on Roli to carry the team to gold. Possibilites certainly include Pascal Leclaire, who is having a breakout season, and his return to Halifax (where he played a large part of his junior career) would make for a good storyline. Based upon the current standings, the other top candidates for goalie duty include Roloson, Manny Legace, Mathieu Garon, and two other goalies whose team's are on the playoff bubble: Dan Ellis and Roberto Luongo.

Ideally Nashville doesn't make the playoffs and Ellis is willing to go. He is another goaltender who is having a breakout season, and a Leclaire-Ellis tandem has the talent to win gold in my opinion. The reason I am not drooling over the possibility of Luongo is that if in fact Vancouver doesn't make the playoffs, I can see Luongo passing on the Worlds to be with his wife, who just had a baby after going through a tough pregnancy. The problem with a Leclaire-Ellis combo is that they are not experience goaltenders. Both are just coming into their own at the pro level, Ellis a late bloomer at age 27.

The blueline last year consisted of Dan Hamhuis and Shea Weber from Nashville, Eric Brewer and Barrett Jackman from the Blues, Mike Commodore from Ottawa, Nick Schultz from Minny, Cory Murphy, who is playing with the Panthers this year, but was with HIFK Helsinki this time last year, and Dion Phaneuf was a late addition after the Flames first round loss.

This year, Team Canada will likely name 7 defensemen, and potentially another from the pool of players from the first round exiting teams.


Here are my choices for the initial 7 for this year's D corps, based on today's standings:

Dan Boyle, Tampa: Experience in the pros and for Team Canada at previous Worlds, he will deliver puck moving ability and experience

Eric Brewer, St. Louis: Won Gold with the Team last year, recently named Captain of the Blues. He will be a rock on the Canada blueline and a good D partner for Boyle

Duncan Keith, Brent Seabrook, Chicago: These guys are essentially replacing Hamhuis and Weber from last year's team. Both play intermeshing styles and their familiarity as team mates will make for a good pairing for Team Canada

Jay Bouwmeester, Florida: Hasn't had the best of seasons, but has international experience and can make things happen in all three zones

Mike Green, Washington: High scoring Caps blueliner is having a breakout season, can run the PP and play on the third pairing

Brendan Witt: Adds toughness on the blueline, something that will be needed on the smaller North American rinks 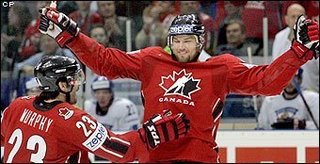 In terms of the forwards, last year's team had Nash and Chimera from the Jackets, Jay McClement and Jamal Mayers from the Blues, Colby Armstrong from the Thrashers, Jordan Staal from the Pens, Justin Williams and Eric Staal from the Canes, Shane Doan from Phoenix, Mike Cammalleri from the Kings, Matt Lombardi from the Flames, and Jonathan Toews, who was with UND at the time.

Both Staals, Williams and Lombardi will be in the playoffs this year, so unless their teams get beat out early you can cross them off the list.

With Hitch coaching, I think it's safe to say that Chimmer and Nash will be back with the team. Cammy is always a scoring threat and should be asked to return. Toews is a no-brainer, Shane Doan will almost undoubtedly asked to return as captain of the team, while Armstrong, Mayers and McClement are wildcards.

Here are my 12 initial forwards, based on today's standings:

Jason Chimera, Columbus: Will play a third line role for the Canucks, similar to last year when he went up against the opposition's top forwards

Shane Doan, Phoenix, Adds offense and leadership. Should get the C again this year

Mike Cammalleri, LA: Scoring threat, he will be relied on for goal scoring, similar to last year

Jonathan Toews, Chicago: He had an awesome year with the 'Hawks, and could pair up with Nash on the top line potentially.

Martin St. Louis, Tampa: Vinny Lecavalier has already stated that he won't be particpating in the Worlds, but we haven't heard that from Marty yet, he would be a potent offensive threat for Canada.

Patrick Sharp, Chicago: He is the perfect fourth liner for the national team, he could play on the checking line and on the PK. His proficiency at scoring shorties is a true asset

Mike Peca, Columbus: A bit of a surprise (and unlikely) pick for most, I see Mike centering the fourth line, for both his chemistry from playing on a line in Columbus with Chimera and for his defensive ability.


To recap, here's my hypothetical 2008 Team Canada lineup, based on today's standings: