Our new Captain, and some trade ideas

Share All sharing options for: Our new Captain, and some trade ideas 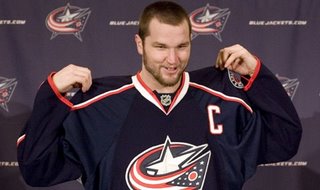 Earlier this week, Rick Nash was named the 5th captain in Jackets history. Nash is the Jackets' first home-grown captain, and represents a new direction for the CBJ. He won't be an in-your-face style of leader like some captains around the league, but as Nash says himself- he will be more of a "lead by example" and "speak up when something needs to be said" style of captain.

Also, Mike Peca was given an "A" on his sweater, joining Freddy Modin, Rusty Klesla and David Vyborny as an assistant captain.

This is of course just pure speculation, but how do these trades sound?

To the Florida Panthers:

I am basing this proposal off of the reported offer that the Jackets sent to Tampa for Brad Richards, but I threw in a first round pick. This fills the void that the CBJ have at center. It would give Nasher his first real centerman, and would add experience and of course talent to the Jacket lineup.


To the Philadephia Flyers: 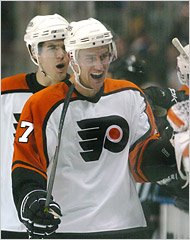 This would give the Jackets more talent at center, and having a 1-2 center punch of Jokinen and Carter would instantly make the team a contender. Carter has played for Coach Hitchcock in Philly, so there would be familiarity with his system. Pineault is having a solid season in Syracuse of the AHL this year, and is one of the Jackets top forward prospects. Carter is an RFA at season's end, so after acquiring his rights we'd need to sign him to a contract, which would be much less than what we would have to pay him to sign him to an offer sheet.

If these trades were to take place, the Jackets would be without a first round pick this year, but it is a fair price to pay to shore up the center position.