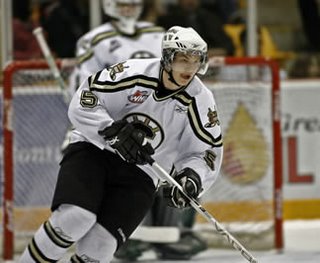 Great move by Howson to improve the depth and quality of the defense prospect pool.

Howson signed Chilliwack Bruins defenseman Nick Holden to a three year entry-level deal. It is essentially the contract given to draft picks when they are signed, during or after their junior careers are finished. Holden was an undrafted free agent, and when the Bruins' season came to an end this week, Holden was targeted by a handful of NHL clubs, with the Jackets winning the sweepstakes.

Holden was the captain of the Bruins, he was third in WHL defenseman scoring with 22G-38A-60PTS, only NHL first rounders Ty Wishart and Jon Blum had more points from the blueline. Holden's 22 goals however, were tops in the 'Dub.

Not only is his offensive talent obvious, but he also stands at 6'3", 200lbs, great size for a blueliner. Combine his size and his talent with the puck with a willingness to muck it up, and we have a very complete prospect added to the system. He is not an elite talent, but certainly a very good prospect.

He'll be joining the Crunch for their AHL playoff run.