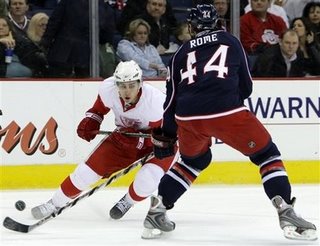 It's hard to say where we'd be in the standings if it weren't for all of the injuries the team went through this year. Several players spent extended periods on the IR, and right now our roster has no less than six players who were Crunch regulars throughout the season.

Freddy Modin seems to have suffered every injury or illness possible this season, and has been essentially a non-factor for the Jackets this year. He has produced when in the lineup, so it bodes well for next season when the team can hope to have him healthy and ready to go.

Danny Fritsche's season is cut short again, last year due to an arm laceration and this year to a busted hand suffered when he took a shot off of it.

Jared Boll and Kris Russell, the rookie roomies, are both our with concussion symptoms. Same for Pascal.

Ole has a fractured vertebrae in his neck, which he has apparently been playing through this season. It could be a reason why he hasn't been the physical force he was last season.

With Fritsche, Boll and Tollefsen out, the team is severely lacking energy. You can count on these three guys to bring it night-in and night-out. There loss has been reflected in the team's play of late.

This season is essentially over, and the remaining games this season will be used to evaluate some impending free agents, namely Picard, Lindstrom, MacKenzie, Rome and Wilson.