The Aftermath of the Trade Deadline, and a Look to Next Season

Share All sharing options for: The Aftermath of the Trade Deadline, and a Look to Next Season 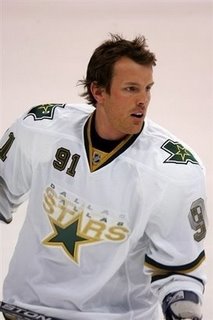 The NHL trade deadline went from being potentially lucrative for the Jackets, to being somewhat disappointing.

The Jackets were rumored to be one of the teams the Tampa Bay Lightning were in talks with regarding a trade involving Brad Richards in the days leading up to the deadline. Rumors came to a head on Monday night, the night before the deadline, when it was revealed that Columbus, Dallas and Vancouver submitted offers for Richards. All were on Richards' list of teams he'd be willing to join. (He had a no-trade clause in his contract)

Richards would have given the Jackets the first real number one center in their history. He would give Nash a linemate who can not only match his skill level, but also improve his production. Another potential linemate for Richards would have been Freddy Modin, who scored 30 goals with the Lightning with Richards as his center.

Tuesday morning it was reported that Vancouver was out of the race, leaving the Jackets and Stars vying for Richards. The point when I lost faith in the Jackets landing Richards was when it was revealed that the Stars' offer included goaltender Mike Smith. The Lightning's glaring weakness this season and last has been the lack of a quality starting goaltender. Richards ended up going to the Stars, with Mike Smith being the deal maker. Columbus was simply not willing to part with Pascal Leclaire or Steve Mason. I completely agree with this, however seeing Richards tally 5 assists in his Dallas debut certainly stung.

When the Jackets lost out in the Richards sweepstakes, they focused their efforts on re-signing Adam Foote and trading Sergei Fedorov, the latter was a move that was going to happen regardless of the Richards situation.

Fedorov was eventually traded to the Washington Capitals in return for college prospect Teddy Ruth. I like this move a lot, as Feds was a UFA at the end of the season, and Ruth is a prospect who I had my eye on at the June draft.

As for Foote, things were not so smooth. In the week and a half leading up to the deadline, Foote was in contract talks with Scott Howson, reportedly asking for a two year contract worth four million per season. The Jackets countered with a two year deal worth three and a half per. On Tuesday morning contract talks stalled, and Foote reportedly asked to be traded. He had a no trade clause and demanded he only be traded to Colorado. Columbus Dispatch writer Michael Arace gave his take this morning, and I agree wholeheartedly:

Something stinks with Foote's story on staying put

The one good side to the situation is that Scott Howson was able to acquire a conditional first round pick in return for Foote. If Colorado makes the playoffs this season, the first rounder will be at this year's draft. If not, it will be in 2009. Also, if Foote signs with the Avs this season, we get their fourth rounder.

Looking back on the deadline, the Jackets did well to acquire solid assets for players who, as it turned out, would not be back with the team after their contracts expired July 1st. 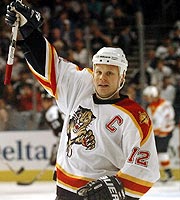 Fast forward to the end of this season. The next trade period opens in time for the June draft, and I think it's safe to say the Jackets will be looking to upgrade their center position again. This time the target will be Olli Jokinen. It has been reported- most recently I heard Bob McKenie from TSN talking about it on XM 204- that Jokinen will more than likely be moved at the draft. The Jackets would likely offer the Panthers a package similar to what they offered the Lightning for Richards- Gilbert Brule, Dan Fritsche, and Ole Tollefsen. If a bidding war ensues, which almost undoubtedly will, the Jackets can sweeten the pot by adding in a prospect like Joakim Lindstrom or Adam Pineault, and the first round pick acquired from Colorado for Foote.

Hypothetically speaking, if the Jackets could land Jokinen, Columbus would then have four quality forwards anchoring the top two lines- Nash, Jokinen, Zherdev, and Freddy Modin. Personally I think the team should re-sign Mike Peca to an incentive-laden two year deal, and let him run with the second line center position. He could potentially be the team captain next season, a move which I would love. Peca has had durability issues of late, but if he is on the second line he wouldn't be seeing the other team's top checkers and he would have reduced ice time, so it shouldn't be much of a factor. The remaining top six position could be filled either in-house, with a young prospect like Lindstrom (if he's not part of the Jokinen package) or via free agency by signing a guy like Vinny Prospal.

We could potentially be looking at a top six of:

As for the bottom six, the third line is already set. The Jackets could go with the best line from this year's traning camp: Chimera - Brassard - Voracek. Jake isn't AHL eligible next season, so it's Halifax or Columbus for him. If he and Brass are on the third line, they will be seeing lower quality checkers, so they could have the space to work their magic. Also, they won't be relied on for offense, so they won't have as much pressure to put up points. Chimmer adds a veteran presence and is having a breakout year offensively this season. The fourth line should be no surprise next season, with four guys in the mix for three spots: Malhotra, Novotny, Boll, and Murray (if he's re-signed, which I think he should be). A surprise rookie could also earn a spot, a la Boll this season.

I think a lineup of

would be very successful. The greatest thing however, is that it is completely realistic. We have the cap space, and young assets which could be coveted by Florida.

As for the defense, there are two priorities in my opinion. One is to re-sign Ron Hainsey, who is having a fantastic year and could be potentially signed for relatively cheap. The other priority would be to throw a bunch of cash at Brian Campbell. He would give the blueline a top puck mover, another position, like the number one centre, which the Blue Jackets have never been able to fill. Rusty Klesla and Kris Russell would be under contract, and the Jackets would re-sign UFA Jan Hejda (which shouldn't be difficult) and sign RFA Marc Methot to a new contract. That is a solid top six.

Freddy Norrena is under contract next season, and Pascal Leclaire is an RFA. He'll get a raise, and i think Howson will look to sign him to a long term deal upwards of 6 years in duration.


Of course this is all speculation, and the chances of the Jackets coming out like bandits by winning the Jokinen AND Campbell sweepstakes are slim, but probable. This looks to be quite an interesting off season in Jacket Land!