To Trade or not to Trade?

Share All sharing options for: To Trade or not to Trade? 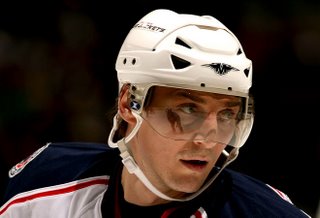 The Jackets certainly have some options leading up to next week's trade deadline. The Jackets sit three points back of eight place Vancouver, and are still very much in the thick of things. Many fans, (myself included) were ready to go in to full-on seller mode after the embarrassing loss to the Hawks, but how did the Jackets respond? They thoroughly dominated the best team in the NHL, on Canadian National TV no less. (The game was broadcasted in TSN here in Canada)

It was a huge win for the Jackets, and for both the team and the fanbase, it served as a shot in the arm, reinvigorating hopes for our first playoff spot. The Jackets received excellent goaltending from Leclaire. Freddy Modin proved how vital he is to the team by scoring two goals- one off of a breakaway where he busted through two Red Wings on their blueline, and another off of a beauty tip-in of an Adam Foote point shot. Nash and Z also found their way on the score sheet, and Ron Hainsey sealed it with a goal late in the game. The final was 5-1 for the good guys.

The game against the Wings was the first of a five game road trip, and the success that the team has over this stretch, which ends on Saturday, February 23 against the Habs in Montreal (a game I will be attending) will give a good indication of what Scott Howson intends to do at the trade deadline.

The way I see it, if the Jackets can win 4 of 5, or heck, even sweep, we will be absolute buyers. We'll hang on to everybody possible, maybe even impending UFAs.

If we win 3 of 5, which in my opinion is the likely scenario, we will likely be buyers, but we won't mortgage the future or cut heavily into our depth to add pieces. We may also be sellers, perhaps trading away potential UFAs like Fedorov.

We already have one win under our belt, but if we only manage to win one more game on this trip, or even lose the next four, Howson would probably go into seller mode, trading away UFAs to be like Fedorov, Hainsey, Vyborny and maybe even Adam Foote.

If the latter happens, many people have speculated as to what we would receive in return for those guys. If Foote is traded, I think it's safe to say that a first round pick would be coming back our way. Maybe a mid to high level defense prospect as well.

Vyborny's trade value is very low right now, chances are a mid round pick would be fair value. Hainsey would net a hefty package, perhaps as high as a second round pick and a prospect. Personally I'd rather see him re-sign with the Jackets.

Some other guys who aren't impending free agents, but could be moved are Gilbert Brule, Freddy Norrena, and maybe Manny Malhotra.

Regardless of what the team does at the deadline, I would like to see Sergei Fedorov moved. We can get reasonable assets in return for him, and it's no secret that Bryan Murray in Ottawa would like to have Fedorov anchor his third line. However, with the Stillman trade last week, the Sens might be done trading. If a trade were to go down with Ottawa, I would love to see a Fedorov for Vermette trade. Antoine Vermette would be a perfect addition to our team. He's an excellent penalty killer, he has great on-ice vision, and can put up points. He's a Hitch player.