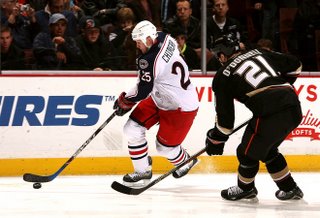 If the Jackets are going to make the playoffs this season, now is the time to turn things around and play tough, physical, Jackets hockey. The stretches of the season when we have been the most physical, when we have had solid goaltending, and when our secondary scorers contribute, have been our most successful. The team has strayed away from that at times this season, and are again in a funk where the players look to Nash and Z to do the scoring, and for Pazzy to steal games.

This team has the ability to dominate teams physically, and has enough talent to outscore top squads, but only when everybody is doing their part in the checking department. Having the goalies healthy and playing to their ability is crucial as well.

Speaking of healthy goalies, Pascal might be out for a few games. He injured his neck when a Caps forward ran himself and Jan Hejda into Leclaire. He could potentially return Sunday, but until then the Jackets have brought up Steve Mason on emergency recall.

Potentiall looking for a spark for the offense, the club has also recalled Joakim Lindstrom from the Syracuse Crunch.

My guess at lines would be:

Murray would be a healthy scratch, and of course Modin and Fedorov are out with injury.


Another interesting piece of news is that Jason Chimera was signed to a four-year contract extension. I think this is a great move. Chimmer is an excellent forechecker, and contributes occasional offense, even though his primary role is as a checking forward. His speed and veteran leadership are other qualities that he brings to the team.