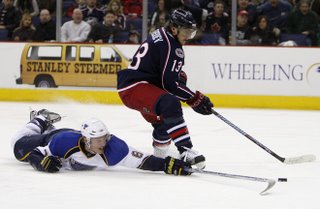 Tuesday's loss to St. Louis could have been the turning point of the season. The team could have, as they have in the past, folded up and called 'er a season. The team was outplayed in every facet, and to make matters worse, Nik Zherdev was nailed by the Blues' David Backes, and was supposed to be out until next week.

The Jackets next game, which was last night against those very same St. Louis Blues, offered the team an opportunity to exact some revenge on the Blues, not only for embarassing them on the scoresheet, but for putting Zherdev out of commission for a handful of games.

However, in a show of grit and heart, Nik Zherdev declared himself healthy enough to re-join the lineup and exact some of his own revenge on the Blues. Nik didn't have a particularly good start to the game, but when the team needed him the most, tied 3-3 in the third period, he stepped up and scored an amazing goal, a between the legs deke followed by a sneaky wrister which found the back of the net. If it wasn't for a fluke goal in the last minute of the game, that goal would have stood up as the game winner. To add to his impressive goal, Z added another off of a partial breakaway later in the period. This is a side of Zherdev we haven't often seen in Jacket Land, he carried the team to victory last night, when he likely should have been resting his injured leg.