Leclaire not in the All Star Game (and other notes)

Share All sharing options for: Leclaire not in the All Star Game (and other notes) 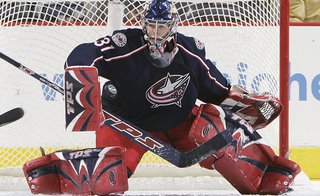 First of all, I have to again apologize for my lack of updates. Things are still outrageously busy at work, but as of next week things should be back to normal.

The biggest news from today was the naming of the Western Conference All Star Team. To be honest, I thought Pazzy was a shoe-in. However, even with Roberto Luongo (the goalie voted by the fans as the Western Starter) deciding to skip the game, Leclaire was not one of the three goaltenders named to the squad. Chris Osgood, Evgeni Nabokov and Manny Legace are the three netminders that will be representing the Western Conference in Atlanta on January 27th.

I totally understand Osgood and Nabokov making the team. Legace however, puzzles me. He has been playing very well of late, but throughout the entire first half of the season he was inconsistent and spilt time with Hannu Toivonen. Here's how the three Western goaltenders, and Pascal, stack up in the league:


As you can see, with the exception of wins, Leclaire is one of the league's top goaltenders. Considering the recent play of the Jackets, it's quite impressive that Pazzy was able to maintain these impressive statistics.

The only reason I can think of for Pazzy not getting named is that either he, or the Jackets coaching and management staff, asked him to skip the event to give him some rest. He's been bothered by a virus that gave him dizzyness lately, so maybe he it would be good for him to take some down time and rest.

- Some good news on the All Star front: Nash was named as one of the Western Conference reserves.

- Derick Brassard was recalled from Syracuse today. Based on comments made by both Hitch and GM Scott Howson, Brass will likely be with the team for the rest of the season. Also, Brassard was named to Team Canada for the AHL All Star Game. With his recall to Columbus, it is unlikely that he will participate, but it is still an honor. Joakim Lindstrom and Clay Wilson were also named to the AHL All Star Game, for PlanetUSA. Lindstrom is a starter. Wilson will definitely be attending, with Lindstrom still with Columbus it's uncertain if he will take part or not.

- To make room for Brassard on the roster, Kris Beech was placed on waivers last night, and this morning was claimed by the Vancouver Canucks. Good luck Kris, thanks for your contributions.

- Marc Methot was called up to Columbus as well. Chances are that he will take Duvie Westcott's spot in the lineup. The Russell-Westcott pairing has been lit up recently, and are the only Jacket blueliners with a negative plus-minus. Methot's dependable, solid style should solidify the bottom pairing, potentially leading to more offensive chances for Russell in 5 on 5 situations.

- In three games since Gilbert Brule was sent to Syracuse, he has three goals, no assists, is a plus-2 and has four penalty minutes. All of his goals came in his second game with the Crunch.

- After missing almost a month training with the Czech national team for the World Juniors, Jakub Voracek returned to the Mooseheads last night and scored once and added a pair of assists and Halifax's 5-2 victory over the Cape Breton Screaming Eagles. At the World Juniors, Voracek was often the Czech's best player, creating many offensive chances and leading the Czechs in scoring with 0-6-6 in 6 games. He showed excellent chemistry with Rimouski Oceanic forward and Florida Panther first rounder Michael Frolik.

- Three of the Jacket's prospects currently playing in Canadian Junior were traded recently, as the junior clubs prepare for the push for the playoffs. The biggest headline was goalie Steve Mason, who is currenly with the Jackets on emergency recall, being traded from the London Knights to the Memorial Cup host Kitchener Rangers. This guarantees that Mason will play in the Mem Cup, the top prize in Junior Hockey. Also, forward Matt Marquardt was traded from the Moncton Wildcats to the Baie-Comeau Drakkar, one of the top teams in the TELUS Division of the QMJHL. Maxime Frechette, the towering blueliner who hasn't seen very much action this season due to injury, was moved from the Drummondville Voltigeurs to the Acadie-Bathurst Titan.