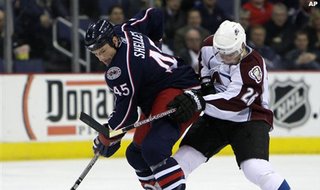 Jody Shelley was traded to the San Jose Sharks Tuesday night. I remember watching Jody in his first year as a Halifax Moosehead. He was a walk-on at training camp, and instantly became a fan favorite. His willingness to stick up for team mates and his outstanding leadership abilities make him one of the most popular Moose players ever. When he signed a contract with Columbus, I was overjoyed that one of my favorite junior players was now a member of my favorite NHL squad. I am disappointed that he was traded, but I am not surprised. He has been a healthy scratch often this season, and guys like Boll and Tollefsen have taken over as the Jackets who chuck the knuckles. All the best in Cali, Jody.

Gilbert Brule was called up yesterday. I'm hoping that it's just to fill a roster spot while Fedorov is on the IR with a concussion. The Crunch media said that Gilbert didn't often display game breaking ability during his 12 game stint in Syracuse. He would sometimes "disappear". Personally, I was hoping he'd be left down in the AHL for the remainder of the season, or maybe called up in March if the Jackets are a serious playoff contender.