Share All sharing options for: Gameday News and Notes 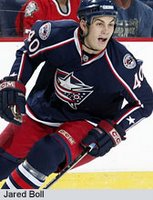 The Jackets welcome the Wild to Nationwide tonight, a place where the Wild haven't won since 2002. The Jackets till have a few players out with injury: Freddy Modin with back spasms, David Vyborny with a sore back, Manny Malholtra with a sprained knee, and Jiri Novotny with a concussion. Some good news regarding Novotny is that he passed his concussion test and will resume skating. Other news on the injury front is that Duvie Westcott, who was also out with a concussion, declared himself ready to play.

The lines for tonight will be a little different than the start of last game. Joakim Lindstrom's great game against the Avalanche earned him a spot on the second line with Glencross and Fedorov. The top line of Mike Peca centering Nash and Zherdev remains together. Kris Beech, who is playing incredible hockey right now, is centering a line with Jason Chimera and Dan Fritsche as his wingers. Gilbert Brule will get some time at center on the fourth line, with Jody Shelley on his left and Jared Boll (pictured) on his right. You can expect the usual defense pairings, and Leclaire will get the start. Pascal is currently second in Western Conference all star voting for goaltenders.

Some affiliate news: if you haven't heard, the Jackets' ECHL affiliate the Elmira Jackals were involved in a bus crash last week. Here's a link to the story:

Jacket prospects Jon Landry and Dan Lacosta were two of the players who were injured in the crash, and will each miss time nursing their injuries. Before the accident, Landry was playing great and had two goals and eight assists in 18 games played. Lacosta has been back and forth between Elmira and Syracuse of the AHL, but with the Jackals he had a record of 5-3-0-1, a goals against average of 2.19 and a save percentage of 0.934. The other CBJ prospect playing in Elmira is Trevor Hendrikx. He wasn't injured in the accident and has 1-3-8 in 22 games played. The Jackals as a team have been playing very well, and they currently sit second in the North Division, third in the American Conference and fifth in the ECHL with a record of 14-6-0-2.

The CHL affiliate of the Jackets, the Youngstown Steelhounds, are still one of the top teams in the league. They have a record of 15-4-1 and sit first in the Northeast Division and second in the league. The Jackets have two prospects playing there: Petr Pohl has 9-14-23 in 16 games played, and Kirill Starkov has a pair of assists in six games.