A Little Bit of Everything

Share All sharing options for: A Little Bit of Everything 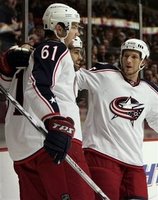 First of all- sorry I haven't been updating the blog consistently of late folks- it's been a rough stretch at work, but things are back to normal now. LJ's been doing a great job of posting his post game recaps, and gave us an excellent primer for the West Coast trip. Thanks LJ!

I've got a few things I'd like to touch on today. A little bit of everything related to the Jackets, their prospects and affiliates.

First of all, let's talk Jackets.

Where do I start? It's got to be in goal. Pascal Leclaire, one of my favorite former Halifax Moosehead players, is absolutely playing out of his mind. After shutting out St. Louis (again), Pazzy leads the league in every goaltending statistical category except wins, in which he's ranked second in the league. That's first in goals against average, save percentage, and shutouts. He's got five already, in only nine starts! Simply amazing.

On the blueline, Adam Foote is playing some of his best hockey as a Blue Jacket. He's not being used as much as in year's past, so he is able to focus on playing his tough as nails brand of hockey five on five, and as a leader on the PK. (Which is a league best 94%). Jan Hejda, a bit of an under-the radar signing this past summer, has been paired with Foote since the beginning of the season, and the two are one of the best shutdown tandems in the league. Hejda is currently leading all Jackets in plus-minus at a plus-6.

The rest of the defense has been doing their part as well, a main reason why the Jacket's are at this point leading the league in goals against. I guess the only criticism I'd have with the blueliners is that I'd like them to contribute a little more offensively. Hainsey and Russell have great offensive talent, so I'm sure the points will come. Russ is still waiting on his first NHL goal.

In terms of the forwards, how can't you be excited about Nash and Zherdev? Nasher is showing that his Richard trophy from a couple seasons ago wasn't a fluke. He is truly becoming one of the game's elite, and is currently sitting tied for third in the league in goals, with ten. He's been an absolute beast, and is creating offensive chances from nothing. Z is also showing a commitment to Hitch's philosophy and is playing his best hockey as a Jacket. He is becoming more of a playmaker than he has shown in the past, where it used to be goals, goals, goals on his mind. Last night's feed to Nasher on his goal is a prime example. These two need to remain linemates in my opinion, because they are clearly on the same page offensively. Finally, the Rick and Nik show has arrived!

The Chimmer-Manny combo is playing great, as usual when they are together. One of the other reasons the team is doing so well is that when the offensive studs like Nash or Zherdev don't put the points on the board, the checking duo steps up and wins games. There have been three games so far, all wins, in which Manny and Chimmer have been the prime point getters. Take last night for example. The team won 3-0, with Manny and Chimmer each getting a goal, and Manny added an assist. Halloween night against the Kings, a 4-1 win- Chimmer had a pair of goals, and Manny had a helper. The 3-0 win over Phoenix earlier this season saw Chimmer rack up a goal and two assists while Manny scored a goal and one assist. It's great to know the team has the depth whereby if Nash or Z, or a healthy Freddy Modin can't put up offense, guys like Chimmer and Manny can step up and lead the team to victory.

Some other interesting notes regarding the forwards- Fedorov is riding a four game point streak after getting an assist last night. Jiri Novotny, my favorite low-key signing from this past summer, is a surprising third in team scoring, with 4-4-8, with two of those goals being of the balls-out effort variety. Novo is quickly becoming one of my favorite Jackets. Mike Peca is playing great as Nash's pivot, and he is also supplying excellent defensive play. Brule, Fritsche, and most importantly, Vyborny, are players who need to pick it up a bit. They are capable of putting up great offensive numbers, and will need to if the Jackets' current pace is to keep up.

To put things into perspective, the team is winning with their all time leading scorer (Vybes) struggling, two of their best young players not finding the scoresheet, and an injured Freddy Modin. If these players can join their fellow forwards in the scoring department, the team will be that much more dominant.

Let's talk about the Crunch a little bit.

The team itself is not off to a great start. They sit sixth in the division, 12th in the conference and 23rd in the league. Popperle and AHLer Adam Munro aren't playing particularly well, and the team is very thin on defense. Pops got off to a slow start last year as well, so there is hope for a turnaround. The defense is led by Marc Methot and Dan Smith, two defense first AHL vets, but after that there are plenty of puck moving blueliners, not so many tough shutdown guys. Add to that fact that half of the blueline consists of rookies, and you can see why the team is struggling. A veteran tough blueliner is needed to bring Syracuse back to where they should be, among the league's elite, based on their talent up front.

Speaking of that talent, there are a few bright spots so far this season, Derick Brassard is off to a terrific start, sitting second in the league in points (17), third in assists (13) and leads all AHL rookies in scoring. Joakim Lindstrom is playing incredible hockey right now. He's second in league goal scoring, one goal behind Clarke MacArthur. I'd personally like to see him get a call up to the Jackets while Modin is out, and let Glencross get a regular shift in Syracuse. The only problem with being Glencross is waiver eligible. The Crunch have three players in the top ten in league scoring, Brassard second, Lindstrom eighth, and Kris Beech ninth. Derek MacKenzie is tied for second in the league for shorthanded goals. He has two.

The Elmira Jackals aren't off to a great start either, as they are currently fifth in their division and 18th overall with a 3-3-0-1 record. Dan Lacosta was recently returned to Elmira from Syracuse, so he should stabilize the crease. The other CBJ prospects playing for the Jackals are Kirill Starkov, Jon Landry and Trevor Hendrikx. Landry and Hendrikx are more defensive than offensive blueliners, and have a combined three assists. Starkov has yet to score a point since joining the Jackals, a bit of cause for concern.

The other CBJ affiliate, the Youngstown Steelhounds, are off to a great start. They are 7-0-1 after eight games, putting them first in their division and second in the league. The Jackets have one prospect playing there, Petr Pohl. He is playing very well, scoring 4-6-10 in eight games.

To finish things off, I want to fire off some quick notes about four of the top CBJ prospects playing in junior:

Matt Marquardt: Sits twelfth in the league in goal scoring, with 12. I've seen him play a ton, and he is doing well in all facets of the game. He has game breaking ability, at least at the junior level.

Stefan Legein: Has hit a bit of a rut, but is still third in the OHL in goals, with 16. He's seventh in the league with 52 PIMs.

Steve Mason: Playing excellent. Fourth in the OHL in GAA and wins, and third in SV%. A lock for the World Junior team in my opinion.

Sorry for the book guys and gals, but I wanted to touch on quite a few points.