Share All sharing options for: Jackets Have St. Louis Singing the Blues Again 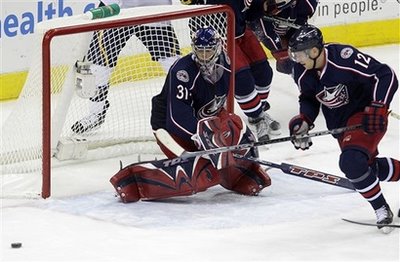 The Blue Jackets began a series of eight consecutive games against division rivalries today by beating the St. Louis Blues 3-0. Manny Malhotra, Rick Nash and Jason Chimera scored for Columbus while Adam Foote contributed two assists. Pascal LeClaire recorded his fifth shutout of the season. Except for a barrage of shots in the second period when he frustrated the Blues time and time again, LeClaire could be heard snoring throughout the rest of the game as the Jackets defense smothered the St. Louis attack by allowing only six shots over the first and third periods.


Columbus improved to 8-3-2 and moved into second place in the Western Conference standings tied with Minnesota.


The media, and maybe even some of the Columbus faithful, might not be convinced yet that this Blue Jackets team can sustain their current pace. But they will get a chance to prove more when they hit the road for three consecutive games against Chicago, Detroit and Nashville. A few points could go a long way towards continuing the confident swag they have been playing with this year, a Hitchcock trademark he talked about when he was hired last November.


A couple of players really stood out to me today. Adam Foote not only contributed on the scoresheet but took a few for the team with numerous blocked shots and a couple of sticks to the face. His play has been steadily improving over the past few games and with playing partner Jan Hejda they have been a formidable shut down defense tandem. Along with LeClaire it is part of the reason why the Jackets have the best penalty killing unit in the league.


The other person who really impressed me today was Nikolai Zherdev. Zherdev was all over both ends of the ice today using his speed and skill to present a danger to the Blues every time he was on the ice. Lately he has been using another weapon in his artillery that I didn't think he had, his body. If I had any doubts that Nikki has fully bought in to the system, the way the Zherdev has been checking over the past few games has convinced me that he has. His skill level has never been questioned and now it appears that his heart is into it and he looks to be having fun again playing hockey. Good for you Nik.


Lastly I wanted to talk about Curtis Glencoss. It must be hard to sit in the press box night in and night out and have to be ready to step in at game speed when called upon. Glencross filled in for the injured Fredrik Modin today, stepped right in and played textbook Hitch hockey. He had Barret Jackman so frustrated at one point that I thought it was Jared Boll who had Jackman so upset. Kudo's to you for being ready when needed Curtis.


Now it's off to Chicago. The Hawks are playing well. One more step in the quest for respect. Color me impressed.