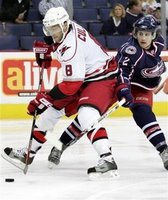 
Kris Russell was one of the biggest surprises in training camp this year, making it impossible for the coaching and management staff to cut him. While you can't really call him a prospect anymore, I'm going to give him one last look before he cements himself as a fixture on the CBJ blue line.

One of the first things you notice about Kris is his diminutive size. He is usually the smallest player in the ice, but he uses his speed and escapability (to borrow the term from Pierre McGuire) to avoid harsh contact during games. He is solid positionally, rarely missing a mark. His offensive skill is his bread and butter, and he has all of the necessary tools to excel as a power play quarterback in the NHL.

Russ played his junior hockey for the Medicine Hat Tigers of the WHL. For the last few seasons Russell has been their clear cut leader, serving as captain and one of their top scorers. The Tigers made it to the Memorial Cup last year as WHL champs, and while the host Vancouver Giants were victorious at the tournament, Russell played great and is able to take the winning attitude to Columbus. Kris has also been a fixture on the Team Canada blue line at the World Juniors. His speed and offensive creativity led to Kris putting up solid point totals en route to Canadian gold.

Outlook: Russ has been compared to a young Scott Niedermayer, and the Jackets believe they have a future star in their lineup. Kris is a natural leader, an offensive force from the back end, and is as steady as they come. If he can continue to avoid significant physical contact by using his blazing speed, he will have a long and distinguished career.