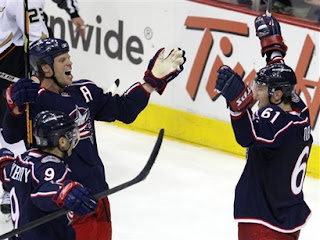 If I could have predicted the perfect game in the Jackets home opener it would have been tonights game. A near capacity crowd watched the Jackets play a game they have seen but a couple of times in their existence. The Jackets controlled the game against the Stanley Cup champions from the opening faceoff and never let up in their 4-0 shutout of the Anaheim Ducks. The cannon blasted often and it was well deserved. At one point the shots on goal were in the Jackets favor 13-0. I would call that total domination. I can only recall one game that compared to tonights game, the 3-2 win last season against the Buffalo Sabres. The difference is that the Buffalo game had little meaning other than pride. Tonight the Jackets set out to make a statement.


Rick Nash had a monster game with 2 goals and 2 assists. Sergei Fedorov showed some old spark wih a goal and an assist. Pascal Leclaire came out of an Anaheim induced deep sleep to register the shutout. Find a permanent home Kris Russell, you are going nowhere. Jan Hejda is a rock and made zero mistakes. The entire team played well from the drop of the puck until the final horn. The only thing to criticize was a rookie penalty on Jared Boll that gave the Ducks a five minute man advantage when the game was still is question and a couple of questionable plays by the defense trying to move the puck out of the zone. Other than that, the Jackets looked like a different team. The team we have been waiting to see.


Now let's come back down to earth. It's one game. The Ducks could have been suffering from jet lag or a number of other things that could explain the lopsided final. Let's see what happens tomorrow in Minneapolis.


But for this one night I am going to sleep with one of the most satisfying memories I've had since the Blue Jackets came into existence. And hope for many more in the future.